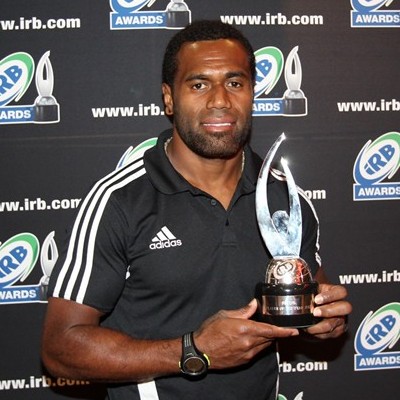 On the same night that New Zealand were crowned HSBC Sevens World Series champions for 2011/12, their playmaker Tomasi Cama has been named IRB Sevens Player of the Year in association with HSBC. Fijian-born Cama was up for the award for the second year running, having lost out to South Africa’s Cecil Afrika last season.

Once again he has been a key factor behind New Zealand’s excellence and the creative spark behind their 10th World Series success.

“It feels awesome. It’s just a reward for all the hard work from the boys. Without them it would have been impossible to receive this award. I want to thank them as well,” Cama said.

“I concentrate on my game and I control what I can control, but to get this is an awesome feeling. Once you have been there for a while you know and understand what’s going on and that’s where the experience comes in.

“For me I just like going out there and enjoying the game, enjoy myself and do what I do best.”

Cama fought off stiff competition from compatriot Frank Halai and England’s Mat Turner to win the coveted individual accolade. As well as finishing the season with 34 tries, Cama’s impeccable drop-kicking helped him to 390 points for the season, the leading mark.

He also ends the season second in the all time point-scoring charts with 1,627, behind only England’s Ben Gollings. Cama becomes the fourth New Zealand player to win the prize, following Orene Ai’i, Afeleke Pelenise and his captain DJ Forbes.

IRB Sevens Player of the Year – Roll of honour