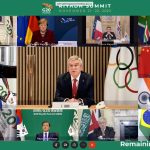 Lausanne, Nov 22, 2020: The world’s leaders assembled at the virtual G20 Leaders’ Summit, hosted by the G20 presidency of the Kingdom of Saudi Arabia, have expressed their strong support for the Olympic and Paralympic Games Tokyo 2020 and the Olympic Winter Games Beijing 2022. The final declaration of the Summit said:
Read More

Lausanne, June 29, 2015: The International Olympic Committee (IOC) today announced that all TV and multi-platform broadcast rights in Europe for the four Olympic Games in the 2018–2024 period have been awarded to Discovery Communications, the parent company of Eurosport. Today’s announcement kicks off a long-term partnership between the biggest global sports
Read More

Lausanne, June 16, 2015: As part of increased collaboration between the International Olympic Committee (IOC) and INTERPOL to protect the integrity of sport through education and awareness programmes, as outlined in Olympic Agenda 2020, the first Partnership Development Meeting (PDM) was held today in Oslo, Norway. Norway was the first country to
Read More

Lausanne, March 19, 2015: The International Olympic Committee (IOC)’s Coordination Commission for the Olympic Winter Games PyeongChang 2018 has wrapped up its fourth visit to Korea, satisfied with progress but clear with the organisers that multiple areas require their focus if the first test events taking place early next year are to
Read More

Lausanne, Mar 15, 2015: The World Anti-Doping Agency (WADA) has announced pledges of USD 6.45 million from world governments in the fight for the clean athletes which will create a joint fund of nearly USD 13 million. One of the first initiatives of Olympic Agenda 2020 was the creation of a USD
Read More
Lausanne, Mar 13, 2015: The IOC today announced that Toyota Motor Corporation (Toyota) will join The Olympic Partner (TOP) Programme. The IOC and Toyota have reached an agreement through to 2024 in the mobility category, which includes vehicles, mobility services and mobility solutions. The announcement was made in the 2020 Olympic Games
Read More

Lausanne, Feb 9, 2015: The IOC Executive Board (EB) will meet in Rio de Janeiro, Brazil, from 26 to 28 February 2015. The EB will consider the priorities for implementation of Olympic Agenda 2020, and is scheduled to receive reports from various IOC commissions, as well as updates on the activities of
Read More

Lausanne, Jan 30, 2015: The International Olympic Committee (IOC), in partnership with UNESCO and several other international organisations, has cooperated on new Guidelines, released today, urging governments and educational planners to invest in the quantity and quality of physical education that they offer. The action-orientated Quality Physical Education (QPE) Guidelines, which are
Read More

Madrid, Jan 23, 2015: The International Triathlon Union (ITU) has reasserted its commitment to fighting illegal betting, match-fixing and corruption in sport by signing up to the International Olympic Committee (IOC)’s Integrity Betting Intelligence System (IBIS). As an intelligence-sharing digital platform, IBIS will enable ITU and its members/national federations to access an
Read More