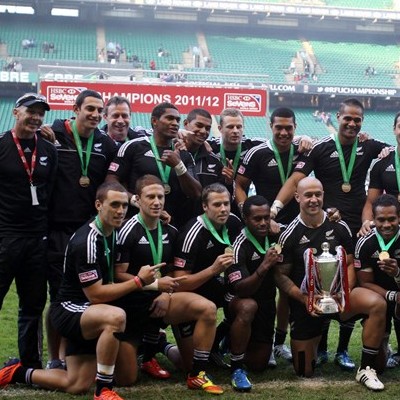 London title, New Zealand have retained their HSBC Sevens World Series title, ending the season with a third place finish at the Marriott London Sevens to finish on 167 Series points, six ahead of closest rivals Fiji.

The New Zealanders sealed a 10th Series title with a ruthless 36-0 quarter final win against South Africa, but fell to a brilliant Fijian performance in the semi final. However, the New Zealanders recovered to end the season on a high note, beating Argentina in the play-off for bronze.

The Fijians stormed to the London title to cap a season of achievement for them, matching New Zealand’s three Cup titles and underlining just how tight things are at the top of the Sevens game. A record two-day Sevens crowd of 103,027 attended Twickenham over the weekend, a fitting climax to another thrilling season of international Rugby Sevens.

“It’s pretty special, we worked extremely hard to get this one and I think everyone knows how competitive the Sevens Series is now. We came here with an 11-point lead but still with an opportunity of blowing it,” said NZ captain, DJ Forbes. “The quarter final win (36-0 win against South Africa) was probably our only complete game of rugby this weekend, but there was a lot of passion, a lot behind it to make sure we wrapped up the Series.

“At the end of the day it comes down to consistency and that’s where we were probably a little bit ahead, but taking nothing away from Fiji, they’ve done extremely well to win here.

“I guess for us you could see that we’re used to playing under pressure, regardless of where we’re playing. If you’re wearing a black jersey everyone expects you to do well.”

IRB Chairman Bernard Lapasset said: “Once again New Zealand have proved that, over the course of an entire season, they are the finest Sevens side in the world and our congratulations go to them.

“And yet even on this, their day of triumph, they were denied in the Cup semi-finals by their closest challengers Fiji, which again underlines just how competitive our global Game of Rugby Sevens has become.

“In the women’s event too we have seen a wonderful tournament from the Netherlands in reaching a first Cup title and congratulations to England on winning their second title of the season.

“Twickenham has provided a wonderful and fitting stage for the finale of another superb season, capped off by another record crowd for a two-day event. We can look forward to a bright future as we gear towards the 2016 Olympic Games.”

Australia took the Plate in London, beating England, who finished the season in third place ahead of Samoa in fourth and South Africa in fifth. —- Photo: IRB/Martin Seras Lima