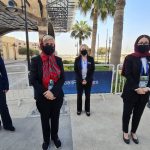 Kuala Lumpur, Nov 24, 2020: Dr. Zohreh Haratian and Dr. Bahar Hassanmiraei from the Islamic Republic of Iran, Dr. Janis Ann Figueroa Espino-De Vera from the Philippines and Dr. Liesel Geertsema from New Zealand have joined the Asian Football Confederation (AFC) history books by becoming the first women Medical Officers to be
Read More
Bahrain, May 01, 2015: The Asian Football Confederation and the International Centre for Sport Security (ICSS) have today signed a wide-ranging partnership agreement to strengthen safety and security in Asian football. The agreement, signed by the Presidents of the two organisations after the AFC Congress in Bahrain, will strengthen existing safety and
Read More
Malaysia, Mar 4, 2015: The AFC Electoral Committee on Tuesday finalised the list of candidates standing for election at the 26th AFC Ordinary Congress 2015 which will take place at the Gulf Convention Centre in Manama, Bahrain, on 30 April, starting at 10am. The AFC Congress is the Asian Football Confederation’s highest
Read More

Kuala Lumpur, Jan 15, 2015: With match-fixing impacting sport the world over, extensive measures have been implemented to combat this threat during the AFC Asian Cup 2015 that kicked off in Australia on January 9, 2015. In this regard, collaboration between the AFC and key stakeholders including the Australian Government and law
Read More

Kuala Lumpur, Dec 16, 2014: The Asian Football Confederation (AFC) has offered its deepest condolences to the families and friends of the hostages who lost their lives during the unfortunate crisis in Sydney and its sympathy to those affected by it. The Confederation has also expressed serious concerns over the safety and
Read More

Kuala Lumpur, September 14, 2014: The media accreditation process for the AFC Asian Cup Australia 2015 is now open. The accreditation window will close on November 30, 2014. Media wishing to cover these events must register (For New user) and apply (For existing user) for accreditation online via their AFC Media Channel
Read More
Kuala Lumpur, August 09, 2014: The Asian Football Confederation (AFC) Disciplinary Committee has handed out two-year bans to two players for doping offenses pursuant to the AFC Anti-Doping Regulations. Avchiev Takhir of Kyrgyzstan and Doan Ngoc Hao of Vietnam had both tested positive for banned substances, a violation under Article 5 of
Read More

Kuala Lumpur, July 25, 2014: AFC U-16 Championship Thailand 2014, The media accreditation process for the AFC U-16 Championship Thailand 2014 is now open. The accreditation window will close on September 1, 2014. The 16-team competition will be played from September 6 to 20, 2014, in Bangkok, Thailand. Media wishing to cover
Read More
Sao Paulo, June 9, 2014: The AFC Extraordinary Congress was proof of AFC’s unity and solidarity. The Congress approved the amendments to the AFC Statutes proposed by the AFC Member Associations relating to the formation of the Executive Committee. This amendment means that the individual elected as AFC President at the elective
Read More

Malaysia, May 26, 2014: Asian Football Confederation (AFC) wishes to express its concern in respect of the intervention by the Anti-Corruption Commission of the Republic of Maldives to investigate alleged misconduct in the sale of tickets of the AFC Challenge Cup tournament currently being held in the Maldives. While the AFC Challenge
Read More