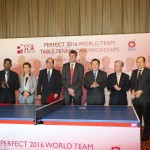 Kuala Lumpur, August 1, 2015: Perfect China Company Limited has been announced as the title sponsor of the 2016 ITTF World Team Table Tennis Championships, to be held on 28th February 2016 to 6th March 2016 at Malawati Stadium, Shah Alam, Greater Kuala Lumpur. This means the second ever ITTF World Team
Read More
Suzhou, China, April 30, 2015: The International Table Tennis Federation (ITTF) and the Asian Table Tennis Union (ATTU) today signed an affiliation agreement to bring the ATTU under the ITTF’s umbrella. The historic affiliation was signed during the ITTF Board of Directors meeting, which was held during the Qoros 2015 World Table
Read More
Kuwait, Feb 16, 2015: MA Long (CHN) has won his 18th World Tour title, at the same event he won his first ever World Tour title eight years ago, at the GAC Group 2015 World Tour Kuwait Open. The world number two’s victory made him the first ever player to win two
Read More
Lausanne, Feb 11, 2015: The who’s who of table tennis are all in Kuwait City ready for the Kuwait Open, which is the first GAC Group 2015 ITTF World Tour Super Series of the year starting today (11 February 2015) and running until Sunday 15 February 2015. The Super Series is the
Read More
Lausanne, Dec 17, 2014: The International Table Tennis Federation (ITTF) is excited to unveil the nominees for the Male & Female Para Star, Star Coach and Star Point, which will be announced at the Dubai 2014 ITTF Star Awards in Dubai on 7 January 2015. The 2nd edition of the ITTF Star
Read More
Bangkok, Dec 13, 2014: 14 year olds Mima ITO and Miu HIRANO from Japan have made history by becoming the youngest ever ITTF World Tour Grand Finals champions today in Bangkok, Thailand. The duo, whose peers would have been at school instead of a $1,000,000 table tennis event, became the World Tour
Read More
Lausanne, Nov 13, 2014: The 12 men’s and women’s teams that will contest for the ITTF 2015 World Team Cup in Dubai on 8-11 January 2015 has been announced by the International Table Tennis Federation. This is the second time Dubai has hosted the prestigious team event, after successfully hosting it back
Read More
Lausanne, Nov 11, 2014: The International Table Tennis Federation is excited to announce that the Dubai 2014 ITTF Star Awards will be held at the Armani Hotel in Dubai on 7 January 2015. The Dubai 2014 ITTF Star Awards is the second edition of the annual year-ending table tennis awards, and it
Read More

Linz – Austria, Oct 16, 2014: 20 of the world’s best table tennis players have arrived in Linz, Austria for the 2014 ITTF Women’s World Cup, which starts tomorrow 17 October until 19 October 2014. Linz has the honor of hosting the first ever ITTF Women’s World Cup outside of Asia in
Read More
September 09, 2014: Singles finals day of the 2014 ITTF Para Table Tennis World Championships was a case of clean sweeps and close shaves, as more than half of the 21 finals matches ended in 3-0 score lines, with five more reaching their conclusion only with a tense fifth game. Current women’s
Read More