Home  »  OTHER SPORTS   »   Sweden wins through in three-round thriller 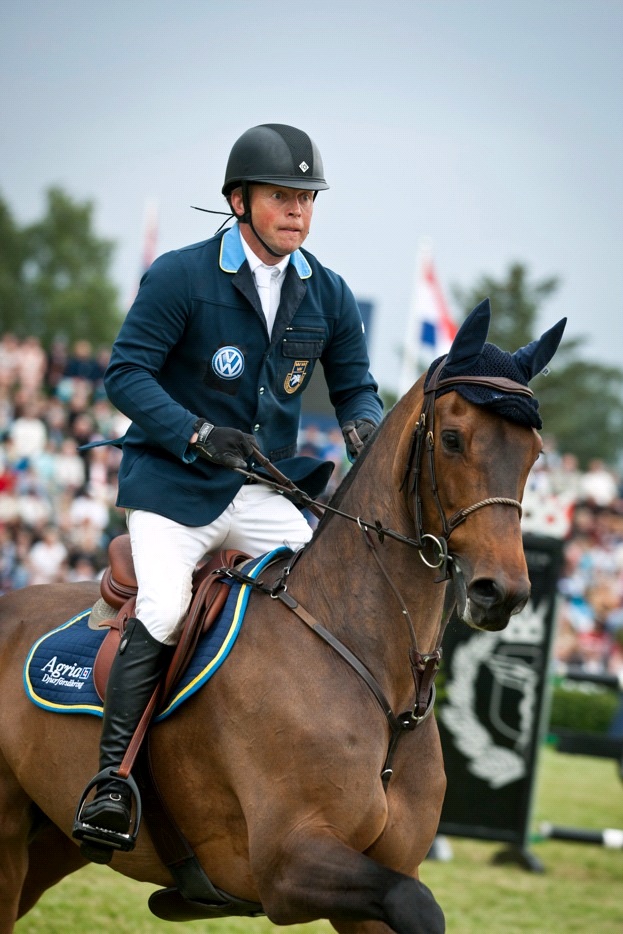 By Louise Parkes, Falsterbo, July 13, 2012: Sweden snatched victory in the sixth leg of the FEI Nations Cup™ 2012 on home turf at Falsterbo today. As the competition progressed it seemed that glory was destined for France for the second week in succession, but in the best tradition of top Nations Cup competition it was unpredictable to the very end, and the result came down to a three-way, third-round race against the clock.

Falsterbo, And it was London-bound Jens Fredricson who clinched it for the host country, in confident and convincing style, riding his super-fast 14 year old gelding, Lunatic. This was Sweden’s fourth FEI Nations Cup™ victory on home soil in the last 10 years and the host country fielded its full team of Olympic riders, although not all were partnering their Olympic mounts.

Great Britain slotted into runner-up spot when William Funnel’s pathfinding jump-off time with Billy Angelo was almost three seconds off the pace and the French, who had looked sure-fire winners in the opening stages, had to settle for third as Jerome Hurel and OHM De Ponthual left a pole on the floor third time out. “This was no Olympic Games” said Fredricson afterwards, “you certainly can’t compare it to what we will expect in London, but it was so great to win at home in front of our own crowd and it’s the perfect result with the Olympics only a few weeks away now”.

Switzerland claimed fourth when accumulating 16 faults, while Germany finished fifth with 20, Belgium slotted in sixth with 24 and The Netherlands racked up a total of 28 for seventh place. It was a deeply disappointing day for the Irish whose chances were shattered in the opening round by big scores from their first two riders, and who couldn’t recover despite a much-improved five-fault tally second time out. They have now dropped even further behind all the rest of the eight nations on the leaderboard, and are a full seven points behind Belgium as the series moves on to the penultimate leg in Hickstead, Great Britain next Friday.

The course designed by Germany’s Christian Wiegand was a relatively uncomplicated affair, but as Fredricson pointed out afterwards it had enough technicality to ensure a competitive class. The triple combination, with a wide opening oxer followed by two tall verticals on a short distance, and the penultimate double both proved influential.

But faults were distributed all across the track, including at the open water and at the final oxer. It was at the latter that the only real drama of the day occurred when Frenchman, Aymeric de Ponnat, was unseated when his 10 year old stallion, Armitages Boy, crashed through the poles. But he managed to cling on long enough to clear the line, and was only penalised with eight faults collected for fences on the floor.

Falsterbo, The French seemed to be in cruise-mode at the half-way stage when they were the only side on a zero score. But Sweden, Great Britain and Switzerland were just a fence adrift as the second round began, and while the Swiss lost their grip as four-fault results for Arthur da Silva (Luis Della Caccia), Christina Liebherr (LB Callas Sitte Z) and Clarissa Crotta (West Side V Meerputhoeve) had to be counted after Martin Fuchs and Principal didn’t return to the ring, the others kept the pressure on.

Last-line rider Penelope Leprevost could still clinch it for France if she could stay clear, ensuring their would be nothing to add to Aymeric de Ponnat’s eight-fault second effort – the 16-fault second-round result for Marc Dilasser (Obiwan de Piliere Jo) providing the French discount score.

Falsterbo, Great Britain’s Will Funnell led the way against the clock with a quick clear from Billy Angelo in 40.75 seconds, but it wasn’t fast enough. Fredricson’s horse, Lunatic, is naturally speedy and as they raced through the timers in 37.62 seconds that was clearly going to be the time to beat. But Frenchman, Hurel, never got the chance to show his true turn of foot as the game was up when OHM de Ponthual hit the very first fence for four faults. It would be a Swedish celebration, and Chef d’Equipe, Sylve Soderstrand, was delighted. “This is a fantastic show, with a great audience – the atmosphere is brilliant!” he said. “I really want to thank my riders – to be in the top three was our goal – winning is never easy – and it really took us to our very last rider to actually win it!” he pointed out.

Fredricson said “It was my day today! I had a really good feeling this morning. Lunatic jumped really well during the two rounds and then, when it was time for the jump-off, there was no way I would end up being second. It happened to me in the past, and this time I thought it was make-or-break time – I might as well jump as quick as I can and if I knock three poles and finish third then at least I won’t have any regrets!” he explained. “This is biggest success of my life, to win our own Nations Cup for my country in front of our home crowd – it’s very special” he added.

Baryard-Johnsson reflected – “walking the course, Jens kept saying how it was actually small, when we were all not so confident. And when it was time to do the jump-off, Jens grabbed his jacket and said “I’m up for it!” so yes, it was definitely Jens‘ day today!” she pointed out.

Henrick von Eckermann was disappointed with his own performance – he picked up 20 faults altogether. “My two rounds were very bad, but I am very honoured to be in this team. It’s a super team with good friends and great team members”.

Reigning FEI European Champion, Rolf-Goran Bengtsson, said he also had a “good feeling” about today, and added that “the crowd really helped. The horse (Ninja la Silla) knew something special was happening. It grew into him, and I barely had anything to do in the end!” he insisted.

Today’s result leaves Sweden in a much stronger position on the FEI Nations Cup™ leaderboard and has lifted team morale at just the right time with the London Olympic Games just around the corner. And for Fredricson it was a pivotal point in his career. “It’s all happening – at the age of 45 I have produced one of the most important results of my life and I am also going to my first Olympics – my brother Peder and my sister-in-law Lisen have both been to Games before, but I have never made it and now I’m getting my chance – what can I say, it’s all pretty wonderful!” he said.