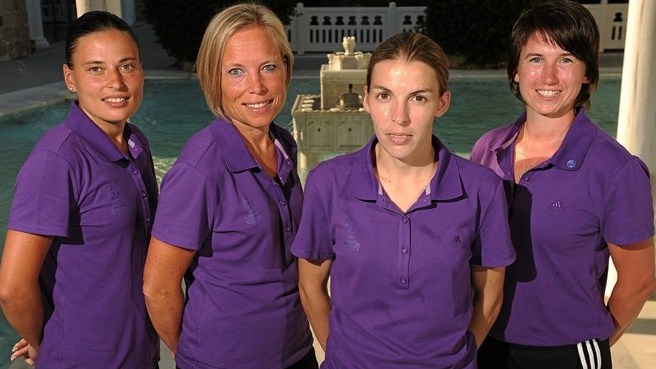 Lausanne, July 13, 2012: For someone going places so fast, French referee Stéphanie Frappart cuts a relaxed figure ahead of the biggest game of her short international career.

On Saturday she will oversee the final of the 2012 UEFA European Women’s Under-19 Championship, the culmination of a season that has seen her raise the bar time and again. Last August she became the first woman to referee in the Championnat National, the third tier of French men’s football, ending the season with 16 impressive games under her belt. Now the 28-year-old is poised to round off her maiden international finals in unanticipated style.

“I’m very happy to get this opportunity,” she said on the eve of the game. “It’s my first final tournament so to get this appointment was a real surprise. I arrived without expectations but after the group stage, when eight officials went home and I stayed, I thought, ‘Oh, I have a chance’.” Indeed, and a glance at her career to date confirms that when a chance arises she tends to take it, as she has swiftly advanced both domestically and in the international game.

Frappart is not ready to halt her rise yet, either. Having broken through the Champion at National barricades she is already setting sights on Ligue 2, even Ligue 1, though she accepts that will be “very difficult, another huge step up.” This tournament in Antalya, she stresses, has helped her progress. “It’s been very nice to work with the other referees, from so many countries. You learn a lot. It’s a great way of developing. We arrived as referees and, after 17 days, we will leave as friends.”

First, though, there is the not insignificant matter of Saturday’s meeting between Sweden and Spain and the easy-going Frappart, who combines refereeing with a full-time job for a federation involved in encouraging walking, is typically taking it all in her stride. “I hope it’s a normal game, with nothing too out of the ordinary. Spain and Sweden are both very good teams, playing at a high level; it will be interesting. Hopefully there won’t be extra time!”

The energy-sapping climate is partly behind that wish but it is also about a sense of fairness, a sense that victory over 90 minutes is a more definitive result, better for both sides. It is a viewpoint perhaps emphasised during a former life: “I played football for five years before I had to choose between playing and refereeing. I felt I had more chance of reaching the top level as a referee so I went for that.” As Frappart gears up to complete a landmark season with an international final, it seems an astute choice. —– UEFA/ by: John Atkin/Image © Sportsfile