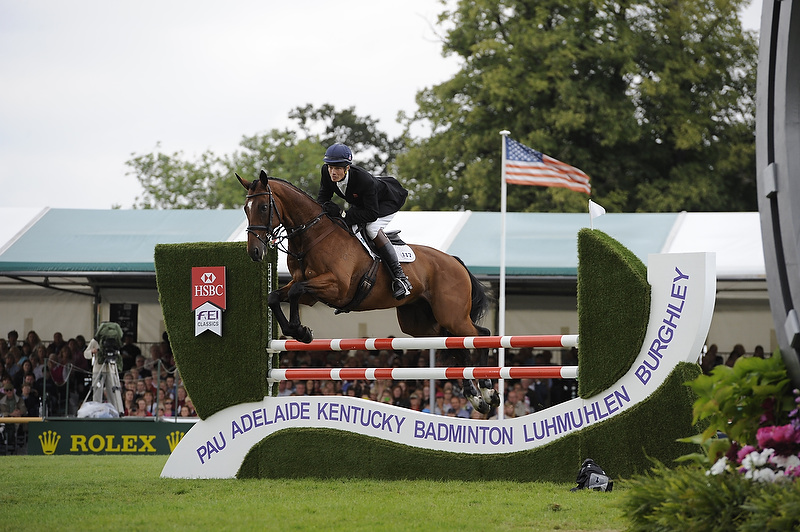 Burghley – GBR, September 02, 2012: In an extraordinary finale to the Land Rover Burghley Horse Trials (GBR), the evergreen New Zealander Andrew Nicholson seized his third victory in 17 years at this popular venue while William Fox-Pitt’s third place was good enough – by just one point – to win him a third HSBC FEI Classics™ title.

Fox-Pitt (GBR), riding Parklane Hawk, had two fences down and Nicholson (on Avebury) one on an influential Jumping track. Between them, they handed the overnight leader Sinead Halpin (USA) a two-fence margin, but to the disbelief of the crowds in the packed stands, the ever-smiling American, who has won many admirers in Britain this week, hit three rails on Manoir de Carneville and finished second.
“It’s a few years since I’ve won a CCI4*, but it just shows you have to keep going in this sport,” said an overwhelmed Nicholson, 51. “I’ve had Avebury since he was a foal and there have been days when he’s let me down and days when he probably thought I let him down, so this is very satisfying.”

The HSBC FEI Classics™, which links the world’s six CCI4*s, went right to the wire as well, with Fox-Pitt clinching the US$150,000 first prize by a single point in the closest finish since the series began in 2008. If he had hit another fence, Nicholson, who was third in 2011, would have become the first non-British rider to win.
“That was close!” said a relieved Fox-Pitt afterwards. “I knew Andrew was on fantastic form and to win by one point was nerve-racking.”

Fox-Pitt’s two CCI4* victories, at Pau in 2011 and Kentucky in April this year, put him in pole position, but he admitted that he wondered if missing Luhmühlen was going to prove to be a mistake.
“It was too close for comfort, but I’m lucky to have had such a good horse as Parklane Hawk here at Burghley,” he said. “The HSBC FEI Classics™ is a great series and much appreciated by riders.”

Halpin was gracious in defeat. “My horse warmed up beautifully but he was possibly a little bit tired. It was disappointing, but I’m really proud of him. I haven’t done as much as these guys [Nicholson and Fox-Pitt] but I will be back, again and again and again!”
Tension mounted as the last riders jumped, as there had only been five clears from the 53 finishers in the competition, the most troublesome fence being the upright red postbox at 11, which also proved difficult when it was used at the London Olympic Games last month.

Allison Springer (USA), the runner-up in Kentucky, had two rails down with Arthur but her final sixth place was still good enough to move her into third place in the HSBC FEI Classics ahead of Luhmühlen winner Michael Jung (GER) and Adelaide 2011 winner Stuart Tinney (AUS). In a fitting finale, Springer joined those great horsemen Nicholson and Fox-Pitt on the podium in front of a cheering crowd at Burghley.
The 12-year-old Avebury, by the Irish Draught sire Jumbo, belongs to Nicholson’s long-time owner Rosemary Barlow, who is well known for organising international supporters’ pavilions at championships, including at Greenwich last month, but who has never had a CCI4* winner in 30 years of event horse ownership.

The horse, which Nicholson sold to a Jumping yard as a four-year-old and then bought back two years later, was first evented by his partner Wiggy Channer until Nicholson ‘stole him back’. The handsome grey gelding has won at all levels and was eighth at Burghley in 2011. He moves and jumps beautifully, but has a cheeky nature and needs to be kept in check when the pressure is on. There is no finer horseman than Nicholson in that situation.

HSBC Training Bursary winner
Lucy Jackson (NZL), who was first reserve for the New Zealand Olympic team, achieved her first CCI4* completion at Burghley, with two horses, and was awarded the HSBC Training Bursary worth US$1,000. She finished 19th on Willy Do after adding 20.8 Cross Country time penalties and six Jumping penalties to her Dressage score of 58.2. She also lay seventh after Dressage on Animator ll, but had a Cross Country stop and dropped to eventual 41st.

Jackson, who was a member of the winning New Zealand team at the Asia-Pacific Olympic qualifying competition at Blenheim (GBR) last year, has been based in Britain for many years, where she has been trained by Gill Watson, long-time trainer of Britain’s under-21 teams. Jackson is also a qualified physiotherapist. Her previous best result was eighth at Bramham CCI3* (GBR) on Willy Do and eighth at Ballindenisk (IRL) on Animator ll this year.

About the Burghley winner
Andrew Nicholson (NZL), 51, the current world number one and leader of the HSBC Rider Rankings, is acknowledged as one of the most hard-working and naturally talented horsemen in Eventing. He first came to England as a 19-year-old and worked with racehorses. His first CCI4* was Badminton in 1984 when he earned a place on the first New Zealand Olympic team, at Los Angeles. He went on to ride at five more Olympics, winning team silver in 1992 and team bronzes in 1996 and 2012, when he finished fourth individually on Nereo. He also won team gold at the 1990 FEI World Equestrian Games™ on another horse owned by Rosemary Barlow, Spinning Rhombus.
Andrew has won numerous CCIs. This is his third Burghley win, following victories in 1995 on Buckley Province and 2000 on Mr Smiffy. He was third in the HSBC FEI Classics™ last year. Andrew has two adult daughters, Rebecca and Melissa, and two young children, Lily and Zak, with his partner Wiggy Channer. They live near Marlborough, Wiltshire.

HSBC’s Training Bursary
At the centre of HSBC’s sponsorship is a commitment to the development of Eventing at every level. As part of its support of the HSBC FEI Classics™, HSBC has introduced a Training Bursary. This is a unique award which is presented to the highest placed rider never to have completed a 4* event prior to 1 January 2011. The winning rider receives a training voucher to the value of US $1,000, which is spent on sessions with a trainer of the athlete’s choice approved by the FEI and the relevant National Federation. —- By Kate Green/Photo: FEI/Kit Houghton