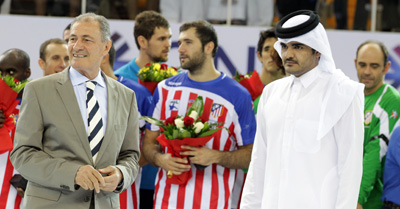 As in 2007 and 2010 Atletico Madrid won the IHF Super Globe now for the third time. The Spaniards took revenge for the lost final in 2011 against THW Kiel and beat the German defending Super Globe champions by 28:23 after a brilliant defence performance. It was not only the revenge for the 2011 IHF Super Globe defeat (25:28), but also for the lost EHF Champions League final in May 2012 (21:26). And one person wrote history: Coach Talant Dushebajews already took his fourth trophy after the three victories with Atletico and the initial victory with Teaka Santander in 1997 as a player. Kiel missed their second trophy by a weak attacking performance after the break, scoring only ten goals in the second half. 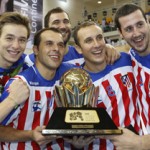 Well-deserved final victory with a clear match winner: Goalkeeper and team captain Jose Javier Hombrados was the key to success. Especially after the break the 40-year-old veteran – combined with the defence – stood like a wall and caused confusion for the THW attackers by his overall 15 saves.

Top scorers of a defence-orientated match were Filip Jicha with seven goals for Kiel and Mariusz Jurkiewicz with five goals for Madrid.

The first half was absolutely equal in numbers: Both teams had 22 attacks each, both teams scored 13 goals each – and both teams focused more on defence than on attack. On THW side, newcomer Marko Vujin imprinted the first 30 minutes with five goals from six attempts; the Atletico team was well balanced in all areas with an intermediate strong period of left back Mariusz Jurkievicz.

After the break goalkeeper Jose Hombrados boosted the stability of the Madrid defence with his saves. And his team – especially strong line player Julen Aguinagalde – took the profit and extended the gap to 22:19 – and even added two more goals after a THW time-out. But the downswing did not change, as the Germans fully lacked concentration against the powerful Spanish defence. Ten minutes before the end, Gislason took his second time-out within only five minutes, when the score was 19:26. From minute 44 to minute 54 the Germans did not score one single goal. They scored only ten times during the entire second half.

Madrid played in black arm ribbon to show their condolence to their player Kiril Lazarov, whose father passed away the night before the match.

In the impressive winner’s ceremony the cheques and medals were handed over to the third ranked Al-Sadd and second ranked team from Kiel, before Madrid’s team captain Jose Hombrados was handed over the winner’s trophy for the victory of the 2012 IHF Super Globe in the confetti and balloon rain of Doha.

Later-on Hombrados was individually awarded best goalkeeper of the tournament. Dragan Gajic of Al-Sadd was awarded best player and top scorer of the 2012 IHF Super Globe.

Alfred Gislason, coach Kiel: Madrid deserved the victory as they were the better team. In the first half we played quite well, but I was not satisfied, in the second half we missed too many chances.

Patrick Wienczek, player Kiel: We did not play a good match. In the first half we showed a quite normal performance, after the break we decreased even more. We were well-deserved defeated.

Talant Dushebajew, coach Madrid: After we had received the tragic news of the death of Kiril Lazarov’s father last night, it was hard and difficult for us to play this final. But my players gave all they could, and it is always great to win against the current Champions League winner. In the end the saves of Jose Hombrados gave us stability and we could score by decisive counter-attacks.

Jose Hombrados, player Madrid: It was a tough match. First it was difficult to defend against Kiel, later-on the defence was the key. It was a strong tournament to start the preparation for the next season. We dedicate our trophy to the father of Kiril Lazarov. —- IHF