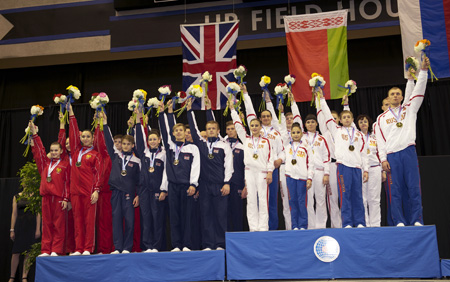 LAKE BUENA VISTA (USA), FIG Office, April 17, 2012: Team Russia won the first gold medal awarded at the 2012 World Acrobatic Gymnastics Championships Tuesday, earning the highest number of points based on team rankings after the qualifying round in Lake Buena Vista (USA). Countries earned 22 points for each first place finish in qualification, 21 for each second place, 20 for each third and so on. The top three groups or pairs from each country counted toward the team total (Gymnastic Acro). 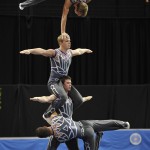 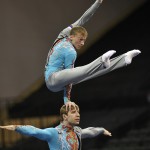 With 64 points based on first place finishes from its women’s group and men’s pairs acrobats as well as a second place ranking by the men’s group, the Russians stood proudly atop the victory stand during the first medal ceremony of these Acro Worlds. Belarus and Great Britian finished in a tie for the silver, each country tallying 59 points. The gold medal was awarded by FIG President Prof. Bruno Grandi, who arrived in Lake Buena Vista on Monday.

Three of the five top qualifiers from the opening day of competition retained their first place rankings at the end of the qualifying round. Belgian mixed pairs duo Laure de Pryck and Nicolas Vleeshouwers presented a highly dramatic routine to a piece from an Italian opera, earning 28.497 points to retain the lead they had built on the strength of their exceptional dynamic and balance routines during the first day.

Russian mixed pair Tatiana Okulova and Revaz Gurgenidze, silver medalists at the 2010 World Championships, could not catch them in spite of turning in a classical, high drama piece of their own. Though Okulova and Gurgenidze outscored de Pryck and Vleeshouwers on the combined routine by posting 28.607, it was not enough to overtake the leaders based on the combined score of the three routines.

In the final, however, all prior scores will be wiped away and pairs will be judged solely on the merits of their combined exercise, meaning the Russian duo has shown it is capable of taking the gold medal. 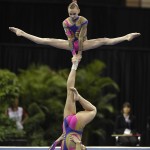 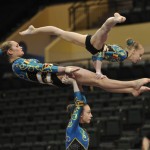 Not to be counted out are Ukrainian pair Inna Batuyeva and Denys Iasynskyi, an elegant couple who appear to be getting better with every routine they perform in Lake Buena Vista. After a mishap on a skill in the dynamic exercise, the pair have fought their way back. Their combined routine, to a dramatic rendition of The Police’s “Roxanne,” was their best yet, receiving a score of 28.26 and lifting them into fourth place overall behind Yunyun Shen and Qi Liu of China, who charmed the audience and judges with a combined exercise that displayed virtuousity as well as simplicity and earned a mark of 27.833.

Russia’s men’s pair Konstantin Pilipchuk and Alexey Dudchenko held their lead with a playful routine, in which they depictued younger boys, high-fiving, flexing their muscles and at one point pretending to juggle. It was a departure from most of the other men’s pairs performers, who performed more somber combined exercises that put power front and center. Nevertheless, Pilipchuk and Dudchenko were the only pair to earn scores of 28.0 or higher for each of their three routines. In the combined exercise, which they will perform again in Wednesday’s final, they earned the highest score of any pair. 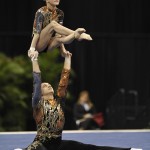 Chasing them are Britain’s Edward Upcott and Adam McAssey, who put together two professional quality performances but still trailed by more than half a point. Belarus’s duo, Ruslan Fedchanka and Yauheni Kalachou, finished a distant third, ending their day with a combined routine that scored 27.841.

The women’s pairs competition saw the return to the top of defending World champions Anastasiya Melnychenko and Kateryna Sytnikova of Ukraine, who reclaimed the lead after losing it briefly to British pair Poppy Spalding and Alanna Baker. The Ukrainians outscored the British in both the dynamic and combined exercises, though both pairs sustained a 0.3 penalty during their last routine of the day. Spalding and Baker have dropped to third behind Belarussians Yana Yanusik and Sviatlana Mikhnevich, who posted the top score (28.159) of any of the six qualifying pairs in the combined exercise.

Nonetheless, the Russia 1 quartet did some overtaking of its own, outscoring their countrymen — and day one leaders — Russia 2 (Artur Avakian, Konstantin Stetsenko, Grigory Sergienko and Yuriy Gerasimov) to earn Russia’s sole team berth to the final. The ever-artistic Chinese 1 team (Jian Teng, Lei Wang, Yi Zhou and Yeqiuyin Wu) put on two more gasp-inducing displays of difficulty and artistry to qualify in third place for the final.

But Britain’s men have it best, knowing that they earned the top score of all groups in the only routine they will have to worry about in the final.