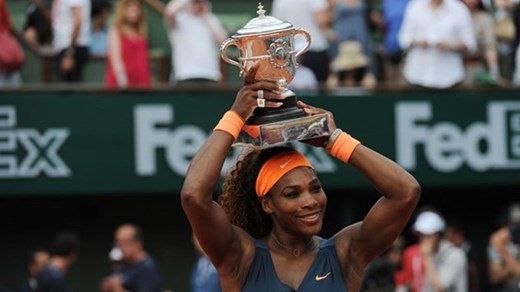 Paris – France, June 12, 2013: Serena Williams lifted her second Roland Garros trophy – 11 years after her first – on the Parisian clay on Saturday. The 31-year-old dropped eight games as she defeated Russia’s Maria Sharapova in one hour 46 minutes to claim her 16th Grand Slam title.

It was Sharapova who secured the first break of serve in the second game of the match but relentless pressure on her own serve meant the lead didn’t last long. Williams won four games in a row and while the Russian battled back to four-all it was only a matter of time until the world No. 1 secured the first set.

Sharapova had promised to try something different in an attempt to end a run of 12 straight defeats to the American but it was Williams who had all the answers. Once again her serve was her most powerful weapon and she fired down her 10th ace on match point to seal victory 64 64.

“I’ve always said a champion isn’t about how much they win but it’s about how they recover from their downs, whether it’s an injury or whether it’s a loss,” said Williams. “I always said that I felt like I have never played my best tennis. I have said that for years, that I feel like I can always do better and play better and I have always wanted to reach that level.

“I’m a competitor and I’m a fighter and I don’t train to lose. Nobody does. So of course I’m disappointed,” explained Sharapova. “But that’s the feeling that ultimately will make you work harder and make you think a little bit. Gives you more determination. So, I hope that that’s what I take away from the match.”

Williams’ last title at Roland Garros came in 2002 and her 11 year gap between trophies here is the longest gap for a woman at any Grand Slam. She also holds the record for the longest span for a player winning Grand Slam titles (at any Grand Slam) as this title came 14 years after her first win at a major at the 1999 US Open.