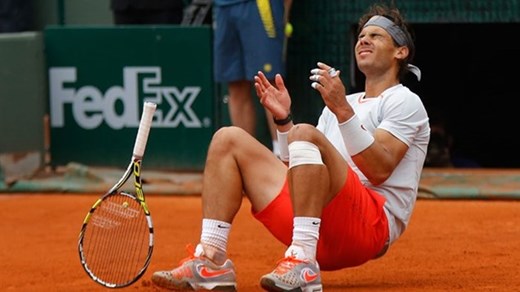 Paris – France, June 12, 2013: Rafael Nadal secured his place in the history books by claiming his eighth Roland Garros on Sunday to become the first man to win eight titles at one Grand Slam event. The world No. 4 defeated first time major finalist David Ferrer 63 62 63 in an all-Spanish final on the clay in Paris.

From the start Ferrer was the underdog and he never looked like causing an upset. He started well to hold to love before a poor service game handed Nadal his first break of the match and the defending champion never looked back. Gritty baseline rallies ensued but it was always Nadal who had the upper hand.

In the damp conditions on Philippe Chatrier Ferrer, who had not dropped a set leading up to the final, put up a fight but could never find a way past his opponent. He had his chances but was unable to convert on the key moments allowing Nadal to demonstrate why he is the king of clay.

“This match was closer than you might think if you only look at the score,” said Ferrer. “But it’s true, I was not consistent enough if you compare this match with other matches I played before. It’s always difficult to have a winning shot with the conditions that were so heavy.”

This victory also moves Nadal into the top spot for most match-wins (59 wins) at Roland Garros ahead of Roger Federer and Guillermo Vilas (58). Despite his loss in the final Ferrer will move to No. 4 in the rankings when they are released tomorrow, while Nadal will drop to No. 5. —- ITF/Photo: Paul Zimmer