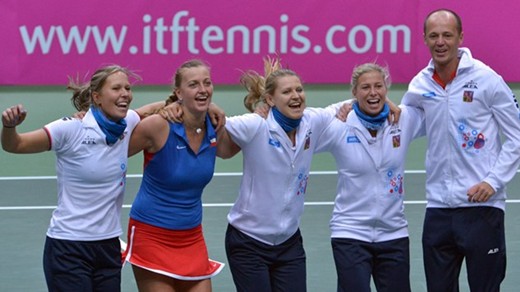 London, April 23, 2012: Fed Cup Final, Czech Republic will be the hosts for the 2012 Fed Cup by BNP Paribas Final and will welcome Serbia, who are playing in their first ever Final. The Czech team entered Sunday in a commanding position and the victory was soon confirmed as was their place in the Final when Petra Kvitova defeated Italy’s Francesca Schiavone 64 76(1) putting them into an unassailable 3-0 lead.

The Italian No.1 had a chance to serve for the second set, leading 5-4 but failed to close it out and her resolve seemed to have disappeared as she slumped in the tiebreak to grant Czech Republic their revenge for defeat in the semifinal two years ago. Captain Petr Pala will now have the chance to lead his team out in a home Final and attempt to defend the crown that they won in Moscow last November.

The Russian team failed in their bid to set up a rematch of last year’s Final as they were turned over at home by Serbia. The tie was delicately balanced at 1-1 after the first day but after a strong start by Anastasia Pavlyuchenkova taking the first set against Ana Ivanovic their challenge seemed to fall apart.

Ivanovic put yesterday’s disappointment behind her and even after a devastating run of games against her to begin the match she fought her way back in to edge Serbia ahead, 36 60 63. Jelena Jankovic was then left to complete a highly successful first semifinal appearance for her country as she triumphed over Svetlana Kuznetsova in straight sets. The Final will be the first time that Serbia and Czech Republic have met in Fed Cup competition.

In World Group play-off action USA completed a whitewash over Ukraine in Kharkiv as Serena Williams and Christina McHale won their singles rubbers against Lesia Tsurenko and Elina Svitolina respectively before Sloane Stephens and Liezel Huber completed a good weekend’s work for the American side.

Japan were also able to complete the job against Belgium having led 2-0 going into today’s matches. Ayumi Morita won her second point of the tie as she conquered Tamaryn Hendler 75 62 and granted the hosts a place in the World Group. Alison van Uytvanck did manage to restore some pride for Belgium against Kurumi Nara in the fourth rubber but Kimiko Date-Krumm and Rika Fujiwara ensured that the crowd went home happy with victory in the doubles.

In one of the ties of the round Slovak Republic managed to edge past Spain and relegate their opponents to World Group II. Dominika Cibulkova was imperious once more to add to her point from yesterday and give the Slovak’s a 2-1 lead. Her countrywoman Daniela Hantuchova had a rough time yesterday against Silvia Soler-Espinosa and Lourdes Dominguez-Lino appeared on course to deal another blow to her when rolling through the opening six games.

Heart Award-winner Hantuchova showed why she has been honoured with the title as she scrapped to an unconvincing, but key, victory in 2 hours 44 minutes, 06 76(4) 64 and put the Slovak’s into the first round of the World Group next year.

The final nation to earn promotion into the elite group were Australia as Sam Stosur wasted little time in adding the vital third point against Germany’s Andrea Petkovic, 64 61. Petkovic was returning from a back injury that has kept her out for much of the year and seemed a little rusty as the two players traded breaks early on before Stosur won seven of the last eight games.

Germany, Spain, Ukraine, and Belgium will be joined in World Group II next year by France, Switzerland, Argentina and Sweden who were the victors in the other play-off matches taking place this weekend. Photo: Martin Sidojaks