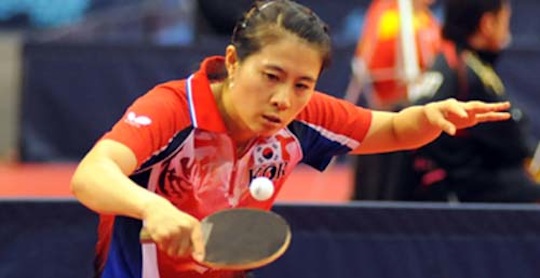 Lausanne (SUI), April 23, 2012: Chinese Taipei’s CHUANG Chih-Yuan and Korea’s KIM Kyung Ah won the respective Men’s and Women’s Singles titles at the GAC GROUP 2012 ITTF World Tour Spanish Open in Almeria on Sunday 22nd April. Both were surprise winners and both were stretched to the limit.

Seeded no.3, CHUANG Chih-Yuan overcame Jun MIZUTANI (Japan) the no.1 seed, in full distance seven games semi-final contest, before accounting for LEE Jung Woo (Korea) the no.5 seed, in the final in six games. A hard fought journey to gold and it was equally as testing for KIM Kyung Ah in the Women’s Singles event. Seeded no.6, she saved two match points before emerging successful against Kasumi ISHIKAWA (Japan) at the semi-final stage.

In the final she accounted for compatriot YANG Ha Eun (Korea), the no.11 seed, who had recovered from a three games to nil deficit against SHEN Yanfei (Spain), the no.15 seed, to book her place in the final. One day earlier SHEN Yanfei had beaten FENG Tianwei (Singapore), the no.1 seed, in the quarter-finals.

Gold in the Women’s Singles event and there was also gold earlier in the day for KIM Kyung Ah in the Women’s Doubles competition, where she partnered PARK Mi Young to success; the pair beat Kristin SILBEREISEN and WU Jiaduo (Germany) in the final. Disappointment for Jun MIZUTANI at the semi-final stage of the Men’s Singles event but in the Men’s Doubles competition it was better news. He partnered compatriot Kenji MATSUDAIRA to victory over YANG Zi and ZHAN Jian (Singapore) to clinch the title.

Meanwhile in Hong Kong and Cary, North Carolina; continent Olympic qualification tournaments concluded on Sunday 22nd April. After a shock defeats in stage one at the Asian Olympic Qualification tournament in Hong Kong, MA Long (China), the world no.1, and RYU Seung Min (Korea), the 2004 Olympic champion, duly booked their London places by succeeding in stage two of proceedings. Success for two star names and in Cary, two young ladies from the United States caught the eye; 15 year old Lily ZHANG and 16 year old Ariel HSING both qualified for the London 2012 Olympic Games.

Women: Ariel HSING (USA), Lily ZHANG (USA Note: ZHANG Mo (CAN) had already qualified as result of winning the Women’s Singles title at the Pan American Games in 2011. All qualifiers are subject to approval by National Olympic Committees