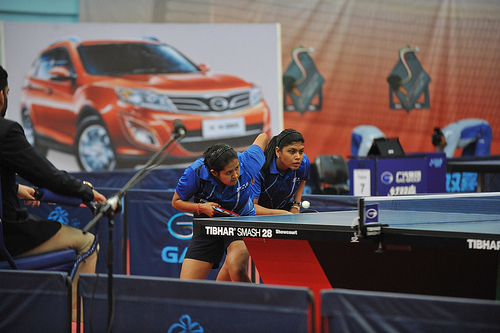 Kuwait, Feb 19, 2013: China completed a clean sweep of titles at the ITTF 2013 World Tour Kuwait Open on Monday 18th February but the player to attract the attention was Singapore’s 26 year old FENG Tianwei.

Against the odds, she accounted for China’s DING Ning, the top seed and reigning World champion, at the semi-final stage of the Women’s Singles event; the Singaporean, who had departed in the opening round one year earlier, excelled all expectations to record a stunning seven games success.

However, it was not to be gold for FENG Tianwei. She was beaten in the final by LIU Shiwen, the no.2 seed and a player in a rich vein of form. The 21 year old Chinese star concluded 2012 in a most impressive manner by winning VOLKSWAGEN Women’s World Cup title in September and the Women’s Singles event at the GAC GROUP 2012 ITTF World Tour Grand Finals in December.

Defeat for DING Ning but there was success; she partnered LI Xiaoxia to Women’s Doubles gold, the pair beating the Japanese duo of Kasumi ISHIKAWA and Misaki MORIZONO in the final.

Meanwhile, in the Men’s Singles event it was success for ZHANG Jike, the reigning Olympic and World champion; in all-Chinese contests, he accounted for WANG Hao in the semi-finals and MA Long in the final.

Success for ZHANG Jike in the Men’s Singles final but earlier in the day in the Men’s Doubles final it was sadness. Partnering MA Long, the pair suffered defeat at the hands of colleagues XU Xin and YAN An.