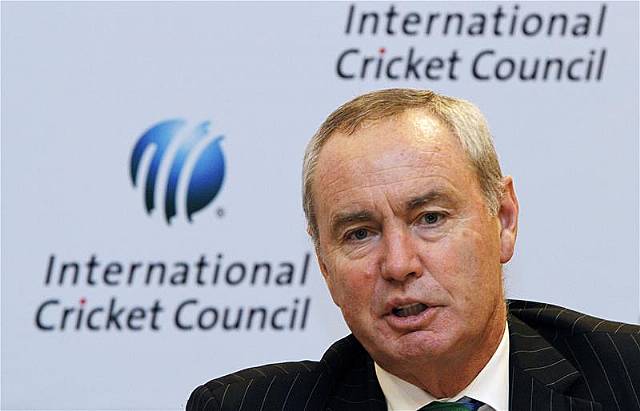 Mumbai, 19 February 2013: ICC President Alan Isaac has thanked the Board of Control for Cricket in India (BCCI) for a successful staging of the ICC Women’s World Cup 2013 and has praised the volunteers, organisers and sponsors for providing a wonderful opportunity to female cricketers to show their talent and potential on a world stage.

He added that the success of the tournament, as well as the forthcoming ICC World Twenty20 event in Bangladesh, where women’s event will be staged alongside the men’s event, would inspire more girls to take up the sport.

He said the quality of the ICC Women’s World Cup 2013 would motivate teams to come to Bangladesh in March 2014 better prepared.

Speaking shortly after Australia beat West Indies by 114 runs at the Cricket Club of India in Mumbai on Sunday, Mr Isaac said: “It has been a high-quality event and has been a fantastic success.

“I think the cricketers have appreciated the level of organisation and expertise that has been brought to the event. I am truly grateful to the people in Board of Control for Cricket in India (BCCI), Mumbai Cricket Association (MCA), Odisha Cricket Association (OCA) and the ICC for the way in which they put the whole thing together. It has been really very impressive.”

“It has truly been a world-class tournament. The event returned to India after 16 years and I know the cricketers have appreciated the level of organisation and expertise that was brought to the event.

“Special thanks to the people of Mumbai and Cuttack along with the venues, who backed this event so magnificently. They prepared for this event despite having a short notice and it showed in the final product,” added Mr Isaac.

The ICC President, who watched Sunday’s final between Australia and West Indies and presented the trophy to the winning side added:“The contribution of the volunteers has been really excellent. They worked tirelessly and contributed immensely to the success of this tournament.

“The ground staff at the various venues also deserves recognition for their talent and devotion in producing pitches that allowed all the eight sides to display their skills in perfect conditions.”

The tournament which was spread over 18 days in which 24 matches produced outstanding individual and team performances with New Zealand captain and player of the tournament Suzie Bates ending as the highest run-getter with 407 runs from seven games at an average of 67.83.

Mr Isaac thanked the players for their superb performances and hoped the exciting women’s cricket calendar would motivate more players. “We should not forget the cricketers who gave their heart and soul for their teams and played cricket in accordance with its rich traditions.

“After watching over the past few days, I was pleased to see the standard. It was a pleasure to watch women’s cricket which was skillful, demanding and very good entertainment.

“It is my certain view that the teams which have not done so well this time will be motivated by the quality of this event and would try to do better in the immediate future.

“With an ICC World Twenty20 event coming up in relatively short period where a women’s event will be staged alongside the men’s event for the fourth time in a row, this is very promising for women’s cricket and more girls will be interested and motivated by this calendar.”

ICC’s broadcast partner STAR Sports produced High Definition live coverage all the ten matches from the Cricket Club of India and ensured that a global audience of millions in more than 150 territories got a chance to see the best of the best in women’s cricket.

“The ICC would also like to thank STAR Sports, its global broadcast partner, for their efforts in producing a high quality broadcast of all the 10 matches played at the Cricket Club of India, as well as STAR Sports’ licensees that broadcast those matches.”

For the first five televised matches of the ICC Women’s World Cup 2013 in India, for which data is available as of now, the TV ratings have shot up by approximately seven and a half times as compared to first five televised matches of the 2009 edition. The number of people who have seen the live telecast of these matches has also seen a six fold increase over the 2009 edition.

Mr Isaac congratulated Australia for winning the ICC Women’s World Cup for sixth time. “It has been an incredible performance by Australia. The way the team performed reflects the talent and self-confidence of the side. It just sums up three great weeks for them in India.

“Congratulations also go to the West Indies which gave a very good account of itself throughout the tournament. It’s just bad luck that their exciting run had to come to an end in the final.

“Lastly, I would like to thank all the players and members of the support staff for giving their best performances while upholding the spirit of our Great Sport. I am sure the players will take a lot of positives from this tournament,” Mr Isaac concluded.