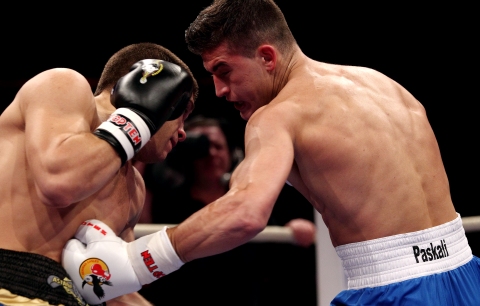 Lausanne, Feb 19, 2013: Classy Germany,This Saturday 23 February (20:00 local time) sees a strong German Eagles line-up ready and eager to pit its wits against the visiting British Lionhearts in an exciting Group B match at the Kuppelsaal Congress Centrum. With the home team’s hopes of qualifying for the knockout stages having been extinguished after defeat against USA last time around, Germany are now boxing for pride. With a long sporting rivalry between these two nations, the action is sure to be gripping after the Eagles nominated Youth Olympic Champion Artur Bril, 2008 Olympic bronze medallist Veaceslav Gojan and 2012 Olympian Stefan Härtel to take to the canvas.

After suffering a surprise defeat in his last World Series of Boxing (WSB) outing, 29-year-old Moldovan sensation Gojan will be hell-bent on claiming his fourth victory of the season when he meets the Lionhearts’ unbeaten Welshman Sean McGoldrick at Bantamweight (50-54kg). Gojan recorded the knockout of the season in week five when he sent Italia’s Parrinello crashing to the canvas twice within the first round with two huge left hooks so we know that he can take out anyone with one punch. McGoldrick, 21, has found himself in the shadow of his compatriot Andrew Selby in this category but he is more than a reliable deputy and has proved his can compete with the very best out there.

2010 was Bril’s year after the now 21-year-old took the Youth Olympic title and won gold at the AIBA Youth World Championships. The transition to the elite level though has now been quite so smooth for the talented Lightweight (57-61kg) with him yet to make a real impression. His fight against Joseph Cordina, another undefeated Welshman, will be another opportunity to demonstrate that he is developing as scheduled as that he is ready to fulfil that early promise. The Lionhearts orthodox fighter faces a big test of his credentials against pedigree opposition.

Härtel was one of the most promising boxers in the competition last season when he began his WSB journey with two victories, but since then things have really not gone to plan and the 25-year-old is now on a four-fight losing streak. He should be regarded as favourite though in his Middleweight (68-73kg) showdown with Estonian bull Kaupo Arro but it will be far from straight forward.

At Light Heavyweight (80-85kg), it will be intriguing to see how the Eagles’ Xhek Paskali fares against three-time National British Champion Lawrence Osueke. The young German has struggled against some strong opposition but the noise coming from his corner is that he is learning fast. His experience should stand him in good stead against Osueke who will be making his WSB debut on Saturday night.

The Eagles will be unveiling their latest Heavyweight (91+kg) recruit in the ultimate contest of the night when 26-year-old Emir Ahmatovic takes to the ring to face Tongan Uaine Fa. An unknown quantity at this level, the German boxer will be weary of the 23-year-old orthodox Lionhearts fighter who boats a 4-2 record in the competition, with his two defeats coming against both the London 2012 Olympic Games Heavyweight finalists.

With second spot still in their sights, be sure that the British Lionhearts will be going all-out for the win. Germany have not quite reached the levels that were expected of them this season but with the atmosphere set to be electric in Hannover, expect it to be a match to remember. —- WSB