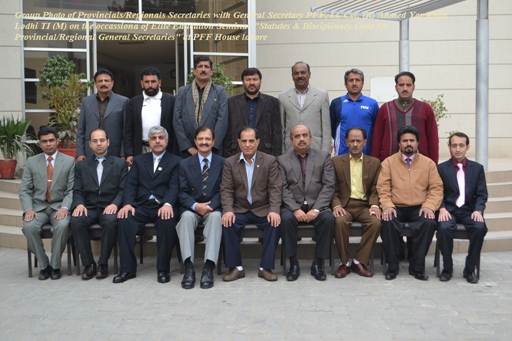 Lahore – Pakistan, Jan 30, 2013: “It is established fact that football cannot prosper and flourish without competent, and highly qualified administrative staff, who should be fully proficient with knowledge of Constitution and Disciplinary Code to ensure the enforcement of laws of the game and takes appropriate measures, if the statutory objectives of Pakistan Football Federation (PFF) are breached, especially with regard to election, forgery, corruption, expulsion and suspension.” This was stated by General Secretary PFF, Lt. Col. ® Ahmed Yar Khan Lodhi in his inaugural address to the participants of the Elite Education Seminar held at PFF House Lahore.

According to PFF, Mr. Lodhi further said that it has become imperative to improve the knowledge of all the administrators of Provincial and Regional Associations to ensure that any infringements of rules and regulations are promptly and correctly dealt by them to enforce discipline. He added that the prime object to hold this seminar is to impart education to Provisional and Regional General Secretaries with further understanding, interpretation and explanation of various articles of the PFF Constitution and Disciplinary Code to ensure enforcing sanctions imposed against infringements committed deliberately, recklessly or negligently by the players, coaches, referees or officials.

Inspector General Police ® Mr. Muhammad Saeed Khan, Member PFF Congress and Chairman Legal & Constitution Committee explained to the participants that a constitution is an asset of fundamental principles or established precedents according to which a state or any other organization is governed. These rules together make up i.e. constitutes what the entity is. When these principles are written down into a single collection or set of legal documents, those documents may be said to comprise a written constitution.

He further added that main purpose of a constitution is to generate a degree of trust and coordination for different kinds of people to live together, second it specifies how the organization will be constituted and who will have the power to take which decision, third, it lays down some limits to the powers of the organization and tells us what are the rights of a member. Last but not the least it expresses the aspirations of the people about creating a good atmosphere.

At this occasion, Director M. A. & Projects, Lt. Col. ® Farasat Ali Shah apprised the participants on various articles and sections of the PFF Statutes & Disciplinary Code.