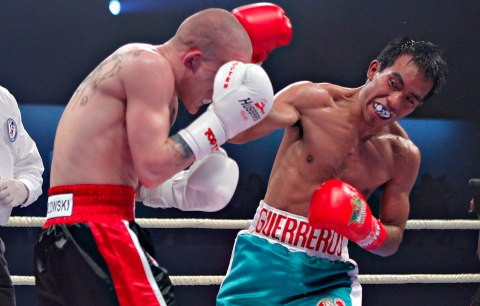 Lausanne, Jan 30, 2013: There will be a lot at stake when continental rivals Mexico Guerreros and Argentina Condors go head-to-head this Friday 1 February (21:00 local time) at Foro Polanco. With World Series of Boxing (WSB) quarter-final qualification in sight, both teams will be gunning for victory. Still undefeated at their home venue this season, Mexico go into this encounter as favourites and will be relying on the speed of Elias Emigdio, the cunning of Marvin Cabrera and the power of Isaac Munoz Gutierrez to deliver maximum points in Group A.

Emigdio, the 2012 WSB Individual Championships finalist and the Guerreros’ leading boxer at Bantamweight (50-54kg) over the past three seasons, will be getting the action underway in the match when he faces 28-year-old Argentine orthodox Ignacio Perrin. With both evenly matched in most departments, the Mexican will be relying on his vast experience and quality shot-making skills to gain the upper hand against an opponent who is very durable and very dangerous on the counter.

Mexican teenager Fernando Alvarez Diaz will then continue his impressive development when he battles 21-year-old WSB debutant Ruben Matias Lazarte at Lightweight (57-61kg). Alvarez Diaz has shown maturity beyond his tender years in his previous two outings and will seek to carry on his fine form with another victory.

With two wins from as many fights this season, 19-year-old southpaw Cabrera is fast making a name for himself in this competition with his all-action displays. The hard-hitting Middleweight (68-73kg) will be pitted against Argentine orthodox Juan Gustavo Solalinde, who is ten years his senior, and will look to maintain his unbeaten record this season.

At Light Heavyweight (80-85kg), the up-and-coming Guerreros Munoz Gutierrez will once again be gracing the rings of WSB as he battles the Condors’ Argentine Isaias Ezequiel Torglele, another new recruit for the visiting team. The 20-year-old Mexican fledgling star is very efficient with his punches, with the ability to operate both inside and at distance, so it will be very intriguing to see how he matches up to the hard-hitting Torglele.

Bringing the show to a close will be the night’s Heavyweight (91+kg) contest between the Guerreros’ larger than life Puerto Rican Gerardo Miguel Bisbal Melero and Argentina’s 24-year-old orthodox Oscar Ricardo Perez. With two wins from three this season and a mean left hook, Bisbal will be intent on notching up another victory against an opponent yet to taste WSB action.

Mexico would take a giant step towards quarter-final qualification with another win at home whilst Argentina know that they need to consolidate fourth place in their Group with Russia having brought in reinforcements over the winter-break. —- WSB