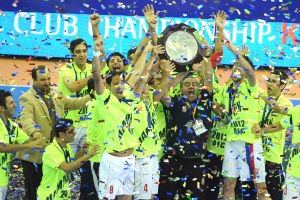 A deflected goal off Artur Yunusov in Afshin Kazemi’s effort gave the Iranian champions an early 1-0 lead in the 3rd minute but Yunusov himself brought the match at level within seconds of the second half followed by a decisive goal from Rudimar Venancio in the 24th minute.

Yunusov, the semi-goal scoring hero playing after a long injury layoff, had an eventful evening as the ball that deflected off him gave the Iranians a 1-0 lead. Credit goes to Kazemi for connecting a powerful shot in the penalty area as goalkeeper Rustam Umarov could not react to stop the deflection off Yunusov.

Ardus’ Jamoliddin got the chance of the match just before the half-time but his fierce shot somehow hit the inside of the goalpost and fell back on the lap of Giti Pasand goalie Hossein Hafshejani.

Ardus brought the match at level within the 30 seconds of the second half after the tournament’s top scorer Ahmad Esmaeilpour failed to perform his defending duties properly. Sharipov’s pass to Yunusov went on Esmaeilpour’s feet but the lanky forward missed the ball and Yunusov utilised the opportunity at its best making it 1-1.

A clever piece of futsal all around helped Giti Pasand hit back in the match with a decisive goal in the 24th minute. Captain Mohammed Keshavarz cleverly passed a freekick to Kazemi who, rounding off two Uzbek defenders, cleverly released the ball to unmarked Venancio who slotted home the 2-1 decisive lead for Giti Pasand.

Ardus tried their best but brilliant goalkeeping from Hafshejani kept all their efforts at bay as Giti Pasand became the second Iranian club to win the competition.