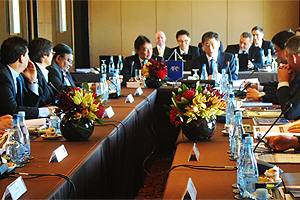 At the outset, AFC Acting President Zhang Jilong praised the progress made by the Australian Local Organising Committee (ALOC) in staging a successful competition.

“I would like to congratulate ALOC for their tremendous work so far in starting to prepare the venues for hosting the biggest football competition in Asia,” said Jilong.

“This is only the beginning and there is a lot that needs to be done in the run-up to the competition but I am confident that Australia will host the best ever competition,” he said.

HRH Tengku Abdullah said the committee members were happy with the development so far and looking forward to the preliminary draw and logo launch later today.

“We have the first big event of this competition today and I am sure Australia’s rich tradition and hospitality will leave an impression on all the team representatives and the committee members alike,” he said.

“There would be obstacles along the way but I am sure that AFC and the ALOC will face them together and find solutions to make the event a success.”

The members were briefed that the selection of host cities and stadiums would be finalised by April 2013. They were also informed about inspections by AFC teams to finalise the Stadium Technical Annex.

The AFC Asian Cup Australia 2015™ logo was unveiled in a glitzy ceremony at Hotel Sofitel here on Tuesday.

The logo depicts a stylised player, kicking a football from the east coast of Australia across country towards Asia. The ball also represents the Australian summer sun arcing west from Australia to Asia.

The four golden bands forming the map of Australia represent the four host cities. The design is embraced by the AFC holding device.

The logo reflects an event that will be a festival of football. It will be celebrated in January, the height of the Australian summer holiday season so the colour palette is warm, festive and embracing of all participants from across Asia.

The design reflects the fun and celebratory nature of the event with a strong sense of movement, energy and excitement.

The elements behind the inspiration include the joys of an Australian beachside summer, the festive atmosphere of bringing many nations together, a sense of adventure Down Under and most of all, evoking the sporting spirit and energy of the game.

The logo is full of dynamic movement, local colour and originality and it celebrates the word-class competitive nature of this great event, albeit with an Australian flavour. —- AFC