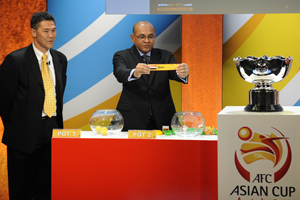 Melbourne – Australia, Oct 9, 2012: Asian Cup success, Renewal of rivalries will be the main feature of the AFC Asian Cup Australia 2015™ qualifiers after the preliminary draw for Asia’s flagship national team tournament was held here on Tuesday.

Twenty teams were divided into five groups of four teams each. The top two teams from each group and the best third-placed team among all the groups will qualify for the tournament proper to be held in Australia in 2015.

Syria were together with Jordan in Group B of the last edition in Doha 2011 but the former crashed out while the Al Nashama advanced to the quarter-finals after finishing second in the group behind eventual champions Japan. This time, the Syrian Eagles, Jordan, Oman, and Singapore who last appeared in 1994, complete Group A.

In another renewal of rivalry, Iran who beat Kuwait in the 1976 final to emerge as the champions have again been put together with the Al Azraq in Group B where they face off against Lebanon and 2007 co-hosts and group stage contestants Thailand.

Iraq are to shake hands with Saudi Arabia again in Group C, having emerged champions in 2007 after defeating the Green Falcons. China PR, who were runners-up in 2004, and 2007 co-hosts Indonesia will keep them company.

In Group E, Central Asians Uzbekistan will meet Hong Kong, the hosts and third place winners of the inaugural edition in 1956. The section is rounded off by 2007 quarter-finalists Vietnam and 1996 runners-up the UAE.

Group D is home to 2011 hosts and quarter-finalists Qatar, who have appeared in the AFC Asian Cup seven times, their neighbours Bahrain, Yemen, and 2007 co-hosts and group stage contestants Malaysia.

The qualifiers will commence in February 2013.

Melbourne: AFC Acting President Zhang Jilong predicted a thrilling AFC Asian Cup 2015 qualifying campaign following the preliminary draw here on Tuesday. Twenty teams came out of the pots to be slotted into five groups of four teams each. The qualifying action will start in February 2014 and end in March 2014 with 11 teams entering the tournament proper alongside hosts Australia, reigning champions Japan, Korea Republic, DPR Korea and the winners of the 2014 edition of the AFC Challenge Cup.

“The long and difficult journey to that day starts here and now with the preliminary draw when 20 of our teams find out the challenges, which await them, as they pursue their aim of qualifying for the final tournament,” said Jilong.

“I can safely predict a lot of goals, plenty of fair play and an endless supply of entertainment during the qualifying period.”

“The AFC Asian Cup is the jewel in the crown of Asian football and sport-loving Australia has been entrusted to host the next edition,” said the AFC Acting President.

“AFC is confident that the AFC Asian Cup Australia 2015 will be the best ever, a perfect and unforgettable celebration of football,” he said.

FFA Chairman Frank Lowy said this is the first big event leading to the biggest football tournament ever staged in Australia.

“We are honoured to be the host of this competition. It will celebrate Asia’s rich football heritage and leave a lasting legacy for the game here in Australia,” he said.

“We believe the AFC Asian Cup will provide many opportunities to strengthen our trade and tourism ties with Asia.”

“The 2015 qualifiers promise to be thrilling because the tournament itself continues to evolve with each passing edition. The AFC Asian Cup easily highlights everything that is praiseworthy about Asian football today,” he said.

“The expectations are high not only of the teams but also of the hosts and my committee is confident that they will deliver a world-class event.”

Premier of the state of Victoria Ted Baillieu said his government would work closely with ALOC to make the AFC Asian Cup Australia 2015™ a great success.

“We are supporting the event because we recognise how important the Asian Cup is for football here in Australia,” said Bailieu.

“Australian governments want to work with the organisers to not only ensure the tournament is a great success but also to strengthen tourism, trade, investment and business ties with Asia,” he said.

“Asia is a growing and important region for Victoria and Australia and I look forward to welcoming many international business people to Melbourne both in the lead-up to and during the event.

“By making these connections we will ensure the Asian Cup is not only about the great football on the pitch, but leaves a great legacy after the final whistle is blown,” he added. —- AFC