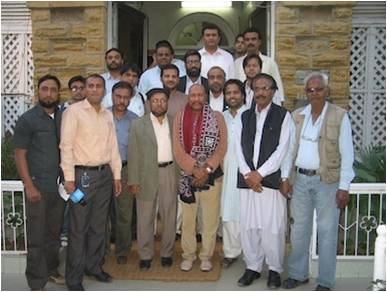 By Rashid Ali Siddiqui, President, Pakistan Sports Writers Federation, Karachi-Pakistan: Former Indian wicket-keeper batsman Syed Mujtaba Hussein Kirmani has stressed the need for the return of international cricket to Pakistan, saying passionate fans should not be deprived of the high-profile action on their soil.

Pakistan has been deprived of international cricket following a terrorist attack on the Sri Lanka cricket team on March 3, 2009 in Lahore.

The Pakistan Cricket Board (PCB) is striving hard to bring back international cricket by inviting Bangladesh to tour the war-torn country next month. The legendary Indian wicket-keeper, who was on a personal trip to Karachi, was addressing members of Sports Journalists Association of Sindh (SJAS) and Pakistan Sports Writers Federation (PSWF) — affiliated with AIPS at a reception hosted by SJAS at Karachi Press Club.

He says: “It’s nice to be here after 20 years. It was memorable to visit the Karachi National Stadium where I first played back in 1979. I met some former Pakistan players there, including Zaheer Abbas and Wasim Bari.”

“The entire subcontinent is passionate about its cricket and no part should be deprived of it. I really want to see international cricket making a return to Pakistan. The PCB, BCCI should start a new chapter.”

He is of the view that while he wanted the revival of Pakistan-India bilateral series, it was not in his domain to speak on the policies of the Board of Control for Cricket in India (BCCI). While the Pakistan Cricket Board (PCB) has shown desperation over the revival of the series, BCCI’s continuous reluctance prompted the board’s chairman Zaka Ashraf to say that India was afraid of playing against Pakistan. However, Kirmani expresses discontent at the comments and says such comments should be avoided.

Kirmani was the quietly efficient worker ant who replaced the flamboyant Farokh Engineer behind the stumps for India, and went on to become their greatest wicketkeeper. His 12-year stint at the top saw a sea-change in the way India played. The early part of Kirmani’s career was spent keeping wicket to the famed spin quartet, never the easiest of tasks. After they faded away, he had to step back a few paces to deal with a seam attack spearheaded by Kapil Dev. It is testament to Kirmani’s greatness as a keeper that he was able to perform both roles with distinction. A doughty batsman down the order, he scored two Test hundreds and baled India out on several occasions. He played a crucial role in India’s triumph in the 1983 World Cup, contributing a flourish or two with the bat in addition to being immaculate behind the stumps.