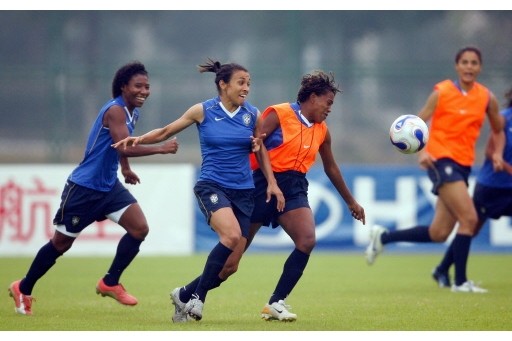 The occasion of the 101st International Women’s day is a great opportunity to celebrate the women’s game and its achievements. Today 29 million girls and women are playing football worldwide, and many more want to get involved, so they too can live their goals. For millions of girls, playing football gives them personal confidence and helps them develop skills in a safe, and healthy social environment.

FIFA invests in the development of women’s football in every corner of the world, and is committed to creating opportunities for female players, coaches, referees and officials to become actively involved.

After Germany 2011 and its fabulous promotion of women’s football, 2012 will be the year of no fewer than three competitions for female players: London will host the Women’s Olympic Football Tournament (25 July to 9 August), Japan the FIFA U-20 Women’s World Cup (19 August to 8 September) and Azerbaijan the FIFA U-17 Women’s World Cup (22 September to 13 October). Find out more about the status of women’s football by accessing the Background Paper on Women’s Football (see link on right column)

 12% of youth players are female

One of FIFA’s missions is to promote the development of women’s football, support women’s football financially and give women players, coaches, referees and officials the opportunity to become actively involved in football. FIFA is helping to popularise the game by increasing public awareness and conducting information campaigns as well as overcoming social and cultural obstacles for women with the ultimate aim of improving women’s standing in society.

• To promote and develop women’s and girls’ football in the confederations and member associations;

• To improve the infrastructure of women’s football in the confederations and member associations;

• To increase the proportion of women and girls playing football at the grassroots, in schools and at amateur and professional levels;

• To constantly improve the quality, organisation and expansion of FIFA women’s football competitions;

• To create conditions for more women to occupy technical and managerial positions in football, including the domains of refereeing, coaching, medicine, media and administration;

• To increase the level of expertise of female coaches, players, referees, doctors, officials and any Other women’s football stakeholders worldwide, through courses, seminars and other capacity building activities;

• To establish and publicize a coordinated international match calendar for women’s football;

• To analyse and monitor technical developments in women’s football;

FIFA women’s football development programmes offer member associations multifaceted support ranging from expertise and teaching and promotional material to football equipment and financial assistance. The programmes on offer for the next four years will strive to encourage and create competition opportunities at all levels for women and girls.

Eleven programmes distributed in four main areas for football development – competitions, management, education and promotion – are available to the member associations for the period 2012-2015. This includes a programme focused on supporting member associations’ women’s leagues and competitions and another one targeting young girls through festivals and promotional initiatives. FIFA encourages the member associations to request programmes that fit their needs and which are in line with their own women’s football development strategy. For more information, please refer to the FIFA Women’s Development Programmes Guidelines 2012-2015:

FIFA provides financial assistance to the 208 member associations. Each member association receives a total amount of USD 1 million over a period of four years, which represents USD 250,000 each year. The member associations have to spend at least 15% (USD 37,500) of this amount on women’s football development according to FIFA circular letter no. 1169.

The confederations also each receive USD 2,500,000 USD per year and have to allocate at least 15% to women’s football.

Within the framework of FIFA’s women’s football development programmes, FIFA provides teaching and coaching manuals as well as promotional material and DVDs to support the member associations’ projects. Furthermore, FIFA provides football equipment for FIFA coaching and refereeing courses as well as for girls’ festivals and women’s leagues.

Aside from the specific women’s football development programmes, member associations can also seek support for their women’s football initiatives through other FIFA programmes such as Goal, PERFORMANCE, and FIFA Grassroots for boys and girls.

The PERFORMANCE programme focuses on various intervention areas and services based on three crucial pillars: strategic, organisational and technical. Member associations can also include women’s football among their priorities for this programme.

The Grassroots Programme is an initiative in which FIFA, its member associations and their respective education authorities work closely together to encourage young children to learn about football and human values and to enjoy the game as much as possible. In short, it aims to bring happiness to children the world over.

There are three committees fully dedicated to the women’s football competitions:

The committees organise the FIFA Women’s World Cup™ and the FIFA U-20 and U-17 Women’s World Cups respectively, in compliance with the provisions of the regulations and agreements applicable to the respective competitions, mainly the Hosting and Bidding Agreement, and deal with any other issues relating to women’s football.

 The competitions organised by FIFA:

This competition format mirrors the one for men/boys, so FIFA has the same competition categories for women and men (U-15 Youth Olympic Football Tournaments, U-17, U-20, Olympics and World Cup). The FIFA Women’s World Cup™ is played every 4 years (since 1991) with 16 teams (24 teams as from 2015).

The Girls’ (U-15) Youth Olympic Football Tournament is played every 4 years (since 2010) with 6 teams – 1 per confederation.

The FIFA Women’s World Ranking is published four times a year. With this ranking, FIFA aims to contribute substantially to further arousing global interest in the women’s game and stimulate discussion. At the same time, this service provides football fans and national players with a realistic comparative assessment. On a more technical note, it enables FIFA and others to better assess the development of specific teams and of the game in general. With the FIFA Women’s World Cup™ as an established feature in the international football calendar, the FIFA/Coca-Cola Women’s World Ranking is designed to give a comprehensive insight into the current strength of the national teams that represent their countries in women’s football.

FIFA also has the same award structure for men and for women (best player of the year, best coach of the year, and also Golden Ball, Golden Boot, etc. for each competition).

FIFA launched a new initiative to inspire women and girls all over the world to participate in football during the FIFA Women’s World Cup Germany 2011. Featuring some of the stars of this summer’s FIFA Women’s World Cup, “Live Your Goals” is targeting the next generation of women’s footballers around the globe.

With “Live Your Goals”, FIFA is aiming to use the popularity not only of the 2011 tournament, but also forthcoming editions of other FIFA women’s competitions, as a catalyst to encourage young women and girls to participate in the sport. The campaign highlights the many different benefits active participation in football brings for young women and girls, ranging from making friends, learning about teamwork and being physically active to coping with challenging situations, emotions and success.

“The ‘Live Your Goals’ campaign is aimed at showing young girls that football is a great way to spend their time, from a social level with friends right up to the professional level at which the players featured in the campaign are playing,” said FIFA President Joseph S. Blatter. “It gives me great pleasure to see the number of women playing football all over the world increasing. As I have always said, football truly is a game for everyone.”

Featuring some top players from the women’s game, such as Germany’s rising star Kim Kulig and Canada’s captain Christine Sinclair, the campaign highlights the challenges which women face to establish themselves in the world of football. The determination, enthusiasm and commitment that it takes to reach the top levels of the women’s game are also very apparent in each of the players’ stories.

Since 1999, every four years at the FIFA Women’s World Cup, FIFA has organised a symposium on women’s football to give support and direction to further develop the game. The 2011 Symposium held in Germany brought together over 550 representatives of FIFA’s member associations from each corner of the world to discuss the current and future development of women’s football. The overall objectives of the symposium were structure, increasing participation and promotion of the game.

Health and fitness of the female player:

IFAB approve two companies for next phase of GLT tests

The International Football Association Board (IFAB) under the chairmanship of The Football Association Chairman David Bernstein, convened for its Annual General Meeting (AGM) today, Saturday 3 March 2012, at the Pennyhill Park Hotel in Surrey, England. The IFAB received a general evaluation of eight available Goal Line Technology (GLT) systems by EMPA (Swiss Federal Laboratories for Materials Science and Technology). The first phase of GLT testing was conducted between November and December 2011.

Of the eight companies, two companies, Hawk-Eye and GoalRef – following the set criteria and recommendation by EMPA – were approved by the IFAB to take part in the second phase of testing. Hawk-Eye’s system uses Optical recognition with cameras, whilst GoalRef utilises a magnetic field with a special ball to identify a goal situation. The second test phase – to take place between March and June 2012 – will rigorously assess the reliability and accuracy of each system, as well as how robust the technology is.

Following the conclusion of Test Phase 2, should one or more companies fulfil the criteria, a Special Meeting of the IFAB in Kiev on 2 July 2012 will decide on a definitive approval of GLT. In relation to the proposed amendments to the Laws of the Game, approval was granted by the IFAB to amend Law 1 (The Field of Play, Commercial Advertising), clearly defining the location of upright advertising. Approval was also granted to The FA’s proposal regarding modifications to the number of substitutions allowed in amateur football. An option was offered to all four British Associations to carry out a two-year experiment.

The IFAB also approved an amendment to Law 4 (The Players’ Equipment) and to Law 8 (The Start and Restart of Play). Law 8 now clearly defines the action that should be taken by match officials, should the ball be kicked directly into the goal from an ‘uncontested’ dropped ball. FIFA agreed to withdraw the proposed amendment to Law 3 (The Numbers of Players) in relation to a fourth substitution being used during extra time, and the proposal regarding Law 12 (Fouls and Misconduct) concerning the so-called ‘Triple Punishment’ will be reviewed further.

In other matters, the IFAB received a presentation on the Additional Assistant Referees (AAR) experiment. Experiments are ongoing in the UEFA Champions League and UEFA Europa League, as well as competitions in Brazil, Morocco and Qatar. A final report will be made at the Special Meeting of the IFAB on 2 July, following the conclusion of the UEFA EURO 2012 competition, in order that a definitive decision on the future of AAR can also be made.

Finally, a presentation regarding the wearing of headscarves by female players was made to the IFAB. The IFAB agreed to the proposal in principle that headscarves be allowed, pending an accelerated review of health and safety issues. Therefore, a final endorsement will be made at the Special Meeting of the IFAB on 2 July.

The decisions concerning the Laws of the Game taken today by the IFAB will come into effect – taking into consideration UEFA EURO 2012 – on 1 June 2012. The 127th Annual General Meeting will take place in Edinburgh, Scotland on 1-3 March 2013. —- Image © FIFA