Lausanne, May 17, 2018: Marking 50 days prior to Opening Day, the World Baseball Softball Confederation (WBSC) today unveiled the groups and a 54-game schedule for the XII WBSC Junior Men’s Softball World Championship, which will be staged from 7-15 July in Prince Albert, Saskatchewan, Canada (XII WBSC Junior Softball). 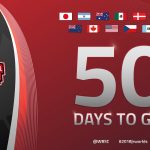 The 13 National Teams competing For the Title of World Champion have been drawn into two groups and will begin the global battle with a round robin (XII WBSC Junior Softball).

The top four nations from each group will advance to the playoffs (XII WBSC Junior Softball).

The Guatemalan and Hong Kong Junior National Softball Teams will be making their historic World Championship debuts from Group B.

“The hosts in Prince Albert are ready to roll out an exciting world stage for these elite athletes, who will have 54 games to prove who’s the best in the world.”

The Organising Committee of the WBSC Junior Men’s Softball World Championship 2018 Prince Albert said: “The host committee, along with the city of Prince Albert, is extremely excited to welcome the world in July! We are thrilled to be bringing world caliber softball to our city and province.”

There will be a total of seven games on Opening Day (Saturday, 7 July) at Prince Albert’s Max Power Ball Parks, with Mexico and Denmark’s 10:00 a.m. contest serving as the official opener.

Tickets sales for the tournament have been launched, with Early Bird specials now available. Children under the age of 12, accompanied by their parent, are free of charge. —- WBSC