La Jolla, California, May 16, 2018: The International Surfing Association (ISA) has continued to push the development of Surfing around the globe by accessing one of the many benefits of Olympic inclusion, the International Olympic Committee’s Olympic Solidarity development programme, to hold ISA Coaching and Water Safety Courses in Panama (Olympic Solidarity supported ISA Courses). 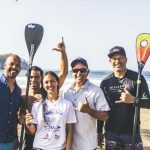 From April 14-17, the Panama Surfing Association (APS) hosted a series of ISA courses in Playa Venao, Panama with the support of Olympic Solidarity and the Panamanian Olympic Committee.

The courses marked a milestone for the development of Surfing in the region, and were the first Olympic Solidarity backed courses to be held in the country.

The IOC’s Olympic Solidarity programme is aimed at supporting National Olympic Committees (NOCs) around the globe, in partnership with Olympic IFs, particularly in countries with the greatest need.

The ISA courses were organized with the goal of elevating the standard of the country’s surf instructors, creating a structure for local surf schools to thrive, developing a free surf programme for low-income children, and promoting ocean safety with aspirations to establish a beach safety and lifeguard programme for Panama’s coastline in the future.

ISA Course Presenter Ernesto Alvarez from Puerto Rico, along with the support of United States Lifesaving Association (USLA) instructor Jose Landruá, presented the four courses over the five-day period, including an ISA Surf Level 1 and an ISA/ILS Water Safety Course supported by Olympic Solidarity as well as a SUP Surfing and Flat Water SUP course supported by the ISA and Panama Surfing Association.

The courses were attended by 21 Panamanians, many of whom are current and past national champions in their respective disciplines. A key outcome of the programme was uniting Panama’s top athletes and surf coaches together to professionalize the standard of coaching in the country.

The ISA/ILS International Surf and SUP Instructor Aquatic Rescue and Safety Course was of particular importance due to the lack of an existing national lifeguard service in the country.

This course, which is a result of a key partnership between the ISA and the International Lifesaving Federation (ILS), laid a foundation for ocean safety in Panama, providing the participating surfers with an opportunity to play a role in its future development.

In addition to the surf-related Olympic Solidarity courses, the Panama Surfing Association took advantage of the opportunity to train five StandUp Paddle (SUP) Instructors to the ISA standard to keep up with the massive growth of SUP in Panama.

Under APS leadership, the SUP community in Panama is approaching 500 participants, has a successful national circuit, and now features internationally trained instructors.

Panama now becomes the fourth country to access the benefits of Olympic Solidarity and hold ISA courses, after Fiji, Guatemala, and the Dominican Republic held successful courses of their own in 2017.

The ISA aims to continue strengthening its collaboration with Olympic Solidarity and National Olympic Committees around the globe to bring accessible coaching and development programmes to non-traditional Surfing nations and continue its global drive to grow the sport.

“Olympic Solidarity has been a key piece in our strategy to further develop the sport of Surfing around the globe. This is one of the many ways that you can witness the direct benefits of Olympic inclusion on a grassroots level taking hold, as we have seen in Panama.

“When Surfing was included in Tokyo 2020, thousands of dreams were born around the world, as many surfers aspired to become Olympians. Through Olympic Solidarity we can create a pathway for more surfers to practice the sport and follow those dreams.”

“I am proud to have been part of such a great initiative and could not be happier with the group that participated. Everyone was stoked and proud of their achievements.

“These participants will be valuable resources for surf and SUP training as well as water safety with the hands on training that they received. They are not only prepared to be instructors and teachers, but also leaders and role models in their respective communities to pass on knowledge, information, and technique to others.” —- ISA/Photo: APS