Tbilisi, Georgia, June 18, 2017: New Zealand ripped up the World Rugby U20 Championship record books with a ten-try 64-17 win over England to lift the distinctive trophy for the sixth time in the 10-year history of the premier age-grade tournament. 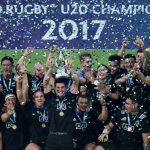 The 10 tries was the most by a single side in a final – beating the seven New Zealand had scored against England in 2009 and Australia a year later – and also ensured that the champions ended the tournament with their highest number of tries at 41.

Captain Luke Jacobson’s try with time almost up on the clock also ensured New Zealand beat their previous record points haul and winning margin in a final, set back in 2010 when they overpowered first-time finalists Australia 62-17 in Argentina.

New Zealand’s backline had produced some sublime rugby across the tournament but today it was the forwards who scored all bar one of the tries at the Mikheil Meskhi Stadium in th Georgian capital Tbilisi, a testimony to the physical display that England simply had no answer to, South Africa completed the medallists after beating France 37-15 in the third place play-off, while Scotland replicated their senior team’s win over Australia to record their best-ever ranking of fifth.

Wales edged Italy late on to finish seventh, while Ireland denied Georgia ninth place in a titanic battle played in an electric environment.

Samoa will return to the World Rugby U20 Trophy next year after losing the 11th place play-off 53-42 to Argentina in the first match of the final day.

FINAL: ENGLAND 17-64 NEW ZEALAND
New Zealand were a different class in the final and never looked like missing out on a sixth U20 Championship title from the moment Dalton Papali’i scored the first of their record 10 tries in the fifth minute at the Mikheil Meskhi Stadium, with defending champions England simply unable to get their own game going thanks to the physical display by the forwards and the attacking prowess of the backline.

New Zealand’s intentions were clear for everyone to see with a stirring Haka and they immediately had England on the back foot when winger Caleb Clarke found some space on the left touchline and it wasn’t long before the opening try came, flanker Dalton Papali’i doing his own impression of Superman to dive over players on the ground to touch down in the fifth minute.

Stephen Perofeta only arrived in Tbilisi a couple of days ago to replace Player of the Tournament nominee Tiaan Falcon after he was ruled out with concussion but, while the fly-half missed the conversion, he was showing just why he started for the Blues against the British and Irish Lions earlier this month, making a break that could have led to a second try just minutes later.

The second try did come in the 10th minute when Isaia Walker-Leaware burst through the middle and Clarke made another break before New Zealand punished some passive tackling from the defending champions when prop Pouri Rakete-Stones barged over. England fly-half Max Malins uncharacteristically missed a penalty in the 12th minute and they would have been punished again had centre Orbyn Leger been able to take a perfectly-weighted kick from Perofeta shortly afterwards.

Perofeta missed a penalty himself in the 17th minute and England scored with their first real foray into New Zealand territory when Malins fed Ben Earl and the openside flanker cut through at pace and was unstoppable on his charge to the line. Tima Faingaanuku looked like he would cancel that score out within minutes when Ibitoye was caught in no-man’s land but Harry Randall’s ‘high-five’ tackle knocked the ball from his grasp with the try-line calling.

New Zealand did, though, score two quick-fire tries to move to 26-7 just before the half-hour mark. First Will Jordan drew the defence and offloaded to Asafo Aumua, releasing the hooker for another sprint to the line and score New Zealand’s 20th try in U20 Championship finals. That was quickly followed by another burst from Jordan after England kicked the ball straight to him, the full-back burst through the defence and Walker-Leaware crashed over.

There was a lengthy delay in play while England hooker Joe Mullis was treated and stretched off, but Perofeta held his nerve to kick the conversion and then New Zealand finished the half with a flourish with two tries in as many minutes, the first through Aumua and then a near length-of-the-field try was finished by Jacobson to give them a point a minute in the first half and leave England scratching their heads at how to contain the waves of attack.

A seventh try followed seven minutes into the second half following a remarkable finish from Josh McKay, the replacement for Clarke, being tackled by Malins but managing to roll over acrobatically and ground the ball. England were given a faint hope a minute later when New Zealand prop Ezekiel Lindenmuth was yellow-carded for a needless late tackle and in his absence replacement scrum-half Alex Mitchell took a quick tap and went over for their second try.

Restored to full complement it wasn’t long before New Zealand scored their eighth try – the most ever by a side – and it was fitting that it was their livewire hooker Aumua to score it to complete his hat-trick and join Telusa Veainu in that elite club, the latter having scored three in the 62-17 win over Australia in 2010. A ninth followed when Tom Christie crashed over with 10 minutes to go to set a record for the most tries in a final with 11 in total.

England had simply not been able to get their game going against a physical and clinical New Zealand side, but they were rewarded when Earl broke and then James Grayson put up a perfectly-weighted kick for his fellow replacement Josh Bayliss to collect the ball on the bounce and dive over. There was still time, though, for New Zealand to fittingly have the final say with Jacobson’s second try.

Jacobson now matches the achievement of his older brother Mitchell, who was an unused replacement when New Zealand beat England in the 2015 final.

New Zealand captain Luke Jacobson: “It feels amazing, it’s been our goal for a long time – you feel it inside. It’s really exciting. We’ve had a discussion in the team about keeping the chat up and staying really positive.

That’s what we did today, we were talking left and right and everybody was staying on the same page. We just kept working really hard and played some good finals footy. England are a great side, I think that we just got a little bit on top of them today. We just got the bounce of the ball, I’m sure that on any other day it may be a much closer score.

“I’m not sure (when it will sink in). I’m sure tonight everyone will keep celebrating and we’ll know about it in the morning. When we wake up tomorrow morning with the medal around our necks I think that is when it’s really going to kick in.”

New Zealand coach Craig Philpott: “It was a good first half, we wanted to start well, we knew that was important in a final. To be up by 40 points at half-time made the half-time message a bit difficult, especially with what happened against France in the semi-final, but the boys went out really hard at the start of the second half and got early points and it was nice to be able to relax in that last 20 minutes.”

England captain Zach Mercer: “I’m disappointed just with this game but through the tournament I’m not. We can leave Georgia with our heads held high. I’ve got real credit in the boys.

I’ve never witnessed a team like that, but for some boys it might be the last opportunity to put the jersey on so as I said we want to keep our heads held high.” —- WR