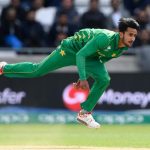 Sunday’s 181 runs victory over traditional rival India was also Pakistan’s first title in a 50-over tournament since winning the ICC Cricket World Cup 1992. It had won the ICC World Twenty20 England 2009, and as such, has become only the fourth side after India, Sri Lanka and the West Indies to win all the three ICC majors.

Hassan also won the Golden Ball trophy after finishing the series with 13 wickets, while India opener Shikhar Dhawan, who had won the player of the tournament in 2013, walked away with the Golden Bat trophy with 338 runs.

Hassan Ali was in sublime form in the tournament when he displayed excellent variation, picked up wickets consistently and in crucial phases during Pakistan’s successful journey in the competition, which had started with a 124 runs drubbing at hands of India at Edgbaston on 4 June.

After being at the wrong end of the stick against India when he picked up one for 70 in 10 overs, Hassan bounced back strongly and returned figures of three for 24 against South Africa, three for 43 against Sri Lanka, three for 35 against England in the Cardiff semi-final and three for 19 in the final against India.

Meanwhile, Dhawan won the Golden Bat trophy after finishing as the leading run-getter.