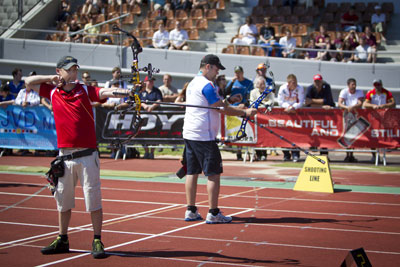 The outdoor target archery competition of the 2013 World Games will feature only the compound division (field archery is also on the programme of the World Games – details on the competition format can be found here: http://www.archery.org/default.asp?s_id=0&m_id=3992&cnt_id=6269).

Twenty-four men and twenty-four women will qualify for the compound competition, where three podiums will be awarded – men, women and mixed team.

At the African Qualifier in March, Petrus MARX won a spot for South Africa by placing first in the men’s event. The second position for the World Games went to Namibia, thanks to a good performance and the second rank by François MARAIS. Namibia won two more positions in the women’s competition, thanks to Beanta VIVIERS and Iroleen VAN LITZENBORGHPAGE, who placed first and second, respectively.

At the European Championships in Amsterdam in late May, the individual champion Sergio PAGNI won a spot for Italy; the runner-up Martin DAMSBO claimed one for Denmark; the third and final spot went to Germany thanks to Paul TITSCHER’s third-place finish. On the women’s side, the individual gold medallist Kristina BERGER acquired a place for Germany, while Italy won two spots thanks to Anastasia ANASTASIO and Marcella TONIOLI, who finished second and third.

Our review of the Americas World Games Qualifier, which took place in late May, can be found here: http://www.archery.org/default.asp?s_id=0&m_id=3992&cnt_id=7165

So far the host nation Colombia has four spots, Italy and Namibia have three, El Salvador and Germany two, while Denmark, South Africa, the United States, and Venezuela have one.

At the World Games, the compound athletes will shoot the 50m Round in qualifications: 72 arrows at 50 metres on a target face with six scoring rings (10-5 points). Each arrow out of the 5-point ring is considered as a Miss (0 point). The score is cumulative. At the end of qualifications, the athletes or teams are paired on a match chart based on their ranking (byes may be awarded).