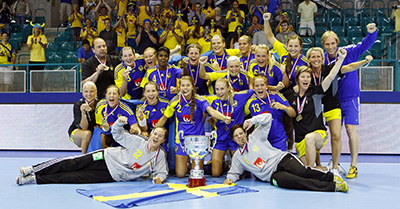 July 17, 2012: The Women’s Junior World Championship in Czech Republic is history. 24 teams, 100 matches and 14 days, these are the bare figures of the tournament with two finalists, France and Sweden, that were not overwhelmingly dominant throughout the whole tournament but that came closer and closer to their best form in the course of the tournament. This is particularly valid for Sweden, which had to be the main contender for the title, as it had been the gold medalist of the Women’s Youth WCh held in the Dominican Republic two years ago but which had some trouble to find into the tournament. “It took us some time to get ready as a team” the coach of Sweden’s junior side said. “We finally made it and that proves the great potential of this team.”

The same is perfectly valid for the young Frenchwomen too. It was fascinating to observe how the team, which does not dispose of really outstanding individual players, grew together as a collective in the course of the tournament. If further evidence had been needed, their semi-final against Hungary finally backs it, as the collective beat the better individual players. Strictly disciplined in tactics the French girls put their heart into the match to reach both the final and their fans’ hearts. This new French style is first and foremost the work of coach Paul Landuré, who managed to spur his players to their best form. “We did what we are able to do and thanks to discipline and orderly tactics we did it very well.”

The fans on site mainly watched inspiring handball. It is always nice to see that the Scandinavian teams make a hundred of fans pouring into the hall to create an overwhelming atmosphere. Similar is valid for the teams of Spain, Korea, Hungary and France of course. It is without saying that great excitement among the fans occurred every time when host Czech Republic entered the court.

Notwithstanding, the semi-finals and finals attracted the media’s attention. The Czech television, a national TV station similar to BBC, broadcast all four decisive matches live. The number of live stream viewers is also impressive. tvcom.cz recorded nearly 300,000 visits already before the semi-finals and decisive placement matches excluding visits to internet sports channel sportcive.cz. These figures are impressive to prove the wide media coverage of the event.

To a minor extent this might also be due to the very good WCh organisation. Both the IHF and the teams (what is the most important aspect) concluded that the Czech federation managed to stage a WCh without slip-ups. So the parties involved extend their appreciation for the organisers of this WCh.

Another positive aspect was recognised. Manfred Prause, Chairman of the IHF Playing Rules and Referees Commission, noticed that the matches of the entire WCh tournament were really fair so that they did not put the partially rather young referee couples into trouble. Prause especially praised the behaviour of the bench. “During about 100 matches we had to decide only two 2min suspensions against the bench and only four or five yellow cards. It proves a model of good conduct by coaches and the bench people I am really pleased with”, Prause added.

Dr Hassan Moustafa, who also attended the WCh tournament, appreciated the conditions on site. However, he attached greater significance to the progress of the sport and their protagonists. Thus the International Handball Federation’s President’s conclusion was absolutely positive: “I guess the view into the future of women’s handball is positive.” He was indeed impressed by teams, which had participated in the Youth WCh in the Dominican Republic and which had progressed tremendously. And that does not only concern top teams you expected to do so.

It is time now for many of those players to successfully make the leap from the junior to the senior team. With interest you will observe who will be able to join the senior team and to appear at coming major events. The next Women’s WCh will be held in Serbia in 2013. We will certainly see some familiar faces from Czech Republic there.

Please visit www.ihf.info to view all results and statistics of the WCh. —– IHF