By Tom Lloyd, Monaco, Mar 24, 2017: Peace and Sport, the politically neutral organization dedicated to promoting sport as a tool for peace, has launched its 2017 # WhiteCard campaign, inviting the world to show its commitment to global peace efforts. 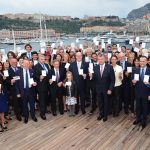 At an official event held in Monaco, Peace and Sport’s President and former Olympic medallist Joël Bouzou joined His Serene Highness Prince Albert II of Monaco, in calling for both athletes and citizens across the globe to participate in the annual #WhiteCard campaign. The initiative encourages people to take images of themselves holding up “white cards for peace” before posting them to social media. 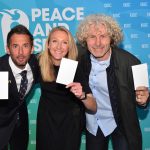 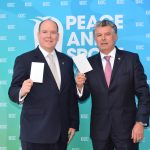 The Minister of State for the Principality of Monaco, Serge Telle, was in attendance on the night, alongside many of Peace and Sport’s Champions for Peace – high level sportspeople committed to the peace through sport movement – including Paula Radcliffe, Stéphane Diagana, Pierre Frolla, former Kazakh cyclist Alexander Vinokourov and retired French rugby union player Jean-Francois Tordo.

This year’s theme is entitled” Show us Where you Play your Peace”, and will encourage people to take pictures of themselves with white cards against iconic global backdrops, such as the Eiffel Tower, the Sydney Harbour Bridge or the Empire State Building.

The #WhiteCard campaign is anchored around the United Nation’s International Day of Sport for Development and Peace (IDSDP), celebrated on 6 April. The IDSDP celebrates the contribution of sport and physical activity to education, human development, healthy lifestyles and a peaceful world.

This launch begins a series of seven key Peace and Sport events taking place in different countries to highlight the work being done to promote peace through sport.

Peace and Sport Founder and President, Joël Bouzou, said:
“Our #WhiteCard campaign helps to spread our vision for a peaceful world across the globe, and this year promises to be no different. Year in year out, our Champions for Peace work tirelessly to promote our message, that sport can be a vehicle for change around the world.

“This year’s ‘Show us Where you Play your Peace’ will encourage people to share their location alongside their white card photos, emphasising the global nature of sport and encouraging people from all races, nationalities and religions to share in our common goal of a peaceful society.”

H.S.H Prince Albert II of Monaco said:
“In my positions as Head of State, Olympian, IOC member and Patron of “Peace and Sport, I support this initiative. It highlights the values of our Principality in the promotion of sport as a tool for peace.”

Former Olympian and Peace and Sport Champion for Peace, Paula Radcliffe, added:
“Sport provides an environment for development and personal growth for all, regardless of background or circumstance.

“Through this campaign, I raise this #WhiteCard to help bring sport to wherever it can assist in bringing peace to the world. Together we can make a difference.”

About Peace and Sport
Peace and Sport – L’Organisation pour la Paix par le Sport – is a neutral and independent organization based in the Principality of Monaco under the patronage of His Serene Highness Prince Albert II of Monaco. Peace and Sport aims to bring the structuring values of sport to the heart of communities and individuals in crisis throughout the world and to promote a culture of peace.