Omaha, Nebraska, Mar 25, 2017: Nebraska Governor Pete Ricketts was among the first to welcome 37 of the world’s elite jumping and dressage horses arriving at Eppley Airfield on Saturday morning for the FEI World Cup™ Finals Omaha 2017. The Finals, featuring the Longines FEI World Cup™ Jumping Final and the FEI World Cup™ Dressage Final, are set to host visitors from around the world at the CenturyLink Center in Omaha, March 29-April 2.

“We are honored to host the FEI World Cup Finals. It is truly exciting for us because this is the first professional world championship we have hosted here in Nebraska,” said Governor Ricketts. “Nebraska is more than just lines on a map. We’re bound together by more than just our common geography. It’s a culture and a way of life.

“Also, with this event we’ll have several thousand people coming to Nebraska to visit us here and the economic impact on the state will be worth about 50 million dollars. We’re thrilled to have this chance to host so many visitors to our state and give them a good reason to come back again.” 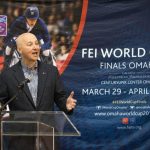 The Governor’s enthusiasm is matched by an aura of excitement permeating the Omaha area in anticipation of the Finals. One cannot help but notice the impact that the World Cup Finals are having on the local community. Banners and billboards are visible all around town and residents of all ages have signed up as volunteers in order to be part of the event.

The horses arrived in a massive Qatar Airlines 777. It was the first time international horses have ever flown into Omaha. Since Eppley is not an international airport, a change in status was necessary for the horses to be able to land just a few miles from the CenturyLink Center.

“We owe a great debt of gratitude to the port director of Customs and Homeland Security as well as the State of Nebraska, for helping to arrange this first international flight of horses into Omaha,” said Tim Dutta, President of The Dutta Corp., which coordinated the horses’ transportation from Europe. “It has been a joy. I hope we have the best ever World Cup Finals and we come back to Omaha again.”

The passenger list of 24 show jumpers and 13 dressage horses read like a “who’s who” in the sport, beginning with Bianca, the 11-year-old Swedish Warmblood mount of two-time defending World Cup Jumping Champion Steve Guerdat of Switzerland. Guerdat, individual Gold Medalist at the 2012 London Olympic Games, is hoping that Bianca will carry him to a record-tying third consecutive title. 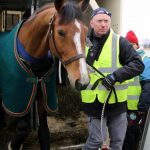 Dressage superstar Weihegold OLD, the mount of Isabell Werth of Germany, the most decorated rider in Olympic history, arrived in Omaha as one of the favorites for the title. The 12-year-old Oldenburg mare that carried Werth to team Gold and individual Silver medals at the 2016 Rio Olympic Games has been dazzling crowds in Europe with historic performances and scores above the magical 90% mark. Werth, ranked number one in the world, will be seeking her third World Cup championship title in Omaha. 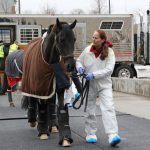 Equestrian sports’ most prestigious annual indoor championship for jumping and dressage horses, the FEI World Cup™ Finals Omaha 2017 has attracted the world’s top riders and horses representing 27 countries, including Olympic, World and European Champions. They will compete for the coveted titles in front of 60,000 fans from all 50 states and 20 countries. 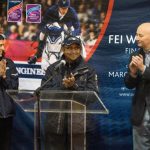 “It’s truly a great organization,” said Dutta. “I have been to 12 World Cup Finals and this is the best. The conditions for the horses and the support of the government and the hospitality of the people in the state have been A-plus.”

Tickets Still Available
A range of ticket packages are still available for the Finals in Omaha! Single-Session tickets for either Jumping or Dressage range from $45 – $85 depending on the session and location. All-Session ticket packages include seats for five events in either jumping or dressage. The best seats in the house are the VIP Tickets in the first 5 rows which include access to the VIP Hospitality Lounge throughout the event! The VIP Hospitality Lounge will feature full meals, open bar, live music, concierge service and other amenities, all included with each VIP ticket. —- Photos by Jim Fackler & Ken Braddick