Home  »  OTHER SPORTS   »   WORLDS BLOCKBUSTER ON THE CARDS 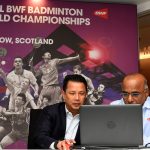 The draw for the year’s biggest individual tournament was conducted at the BWF headquarters in Kuala Lumpur today at a ceremony attended by diplomats, corporate partners and media. 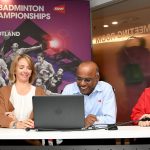 Two-time champion Chen of China, who thwarted Lee’s ambitions in the World Championships finals of 2014 and 2015 as well as last year’s Rio 2016 Olympic Games final, starts his campaign against Georges Julien Paul of Mauritius, while Malaysia’s Lee takes on Frenchman Brice Leverdez who defeated Lee in Denmark last season. 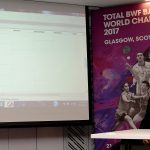 Five-time champion Lin Dan (China) is in the top half of the draw, and takes on local hope Kieran Merrilees in his opener. Lin is in the same quarter as England’s Rajiv Ouseph, Hong Kong’s Wong Wing Ki and Chinese compatriot Shi Yuqi.

Top seed Son Wan Ho (Korea) will have to contend with India’s Kidambi Srikanth and Denmark’s Anders Antonsen in his quarter.

Guests who attended the draw included High Commissioner of Great Britain to Malaysia, Her Excellency Victoria Marguerite Treadell; Third Secretary of the Indonesian Embassy, Tania Pusphawardhani, and officials from Badminton Association of Malaysia.

In Women’s Singles, Spain’s two-time World champion Carolina Marin, who has a bye in the first round, will face either Yip Pui Yin (Hong Kong) or Natalia Perminova (Russia) in the second. Marin will be wary of Japanese challengers later in the draw as she is in the same quarter as Sayaka Sato, Nozomi Okuhara and Aya Ohori.

There are several interesting early round match-ups in the doubles categories as well.

Commenting on the draw, BAM Technical Director Morten Frost predicted that all five categories were too competitive to predict accurately.

“It’s a tough draw for Lee Chong Wei to have Chen Long in the quarter-finals,” he said. “But if you want to win the title, you have to beat them all.

“A Lin Dan-Lee Chong Wei final is a possibility, but I think one player who few talk about is Son Wan Ho. He can make life tricky for the others. There’s a reason he’s the No.1 seed. He’s solid and he’s fighting tooth-and-nail.”

Malaysia has strong contenders in Goh V Shem/Tan Wee Kiong in Men’s Doubles, and Frost acknowledged that they have a tough draw as they are in the same quarter as top seeds Li Junhui/Liu Yuchen (China).

“It looks tough on paper but I know the head-to-head between them is even. I have all faith in Goh and Tan.”

BWF Secretary General Thomas Lund agreed with Frost’s assessment of the closeness of the competition.

“I’m hoping for some great matches. A lot of work has been done behind the scenes with our hosts in Glasgow. They’re marvellous hosts – they’re very good at setting up an event. It’s the perfect backdrop for this great event.”

Lund also praised BWF corporate partners and media: “Without them we wouldn’t be able to pull this off. They’ve worked with us day in and day out. Without the media, we would’ve be able to reach out to the world.”

Earlier, in his welcome address, Høyer said badminton was “blessed to have talented athletes from all over the world”.

“Badminton has come a long way from the days when only a few nations dominated the sport. Today the spread of medal prospects is wider than ever before and spectator interest is at an all-time high… Our appreciation goes to everybody who has been with us on this journey,” Høyer added. —- BWF