By Tom Lloyd, Liverpool, UK – 09 August 2017: Liverpool Football Club U18 manager and Liverpool legend Steven Gerrard has today given his backing to Liverpool’s bid to become the host city for the 2022 Commonwealth Games. 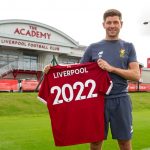 Gerrard, former club captain and UEFA Champions League winner, has backed the bid for his hometown city and believes it would be fantastic to see the city host the Games. Anfield, the home of Liverpool Football Club, will be hosting Rugby 7s and ceremonies during Games time.

Liverpool was this week named the ‘UK’s Greatest Sporting City for 2017’ in a study released by ESPN and the University of Bath, and is proposing a transformational Games vision that will accelerate up to £1bn worth of investment in the city’s docklands area.

“I am delighted to be able to back the city’s bid to host the 2022 Commonwealth Games. Liverpool is a city with a rich sporting heritage with its two football teams, boxing stars and global sporting events such as the Grand National and the Open being hosted on Merseyside.

“As a Scouser, it would be fantastic to have another global event like the Commonwealth Games in Liverpool and would help showcase to the World what a great city Liverpool is.”

“It is great to have Steven Gerrard so positively backing Liverpool’s Bid to host the 2022 Commonwealth Games. During his career at Liverpool FC Steven was recognised as a world-class star of a world-famous football club.

“To have both Steven and Liverpool Football Club so firmly behind the Bid is a further indication of just how determined the city is to win the right to host the Games.”