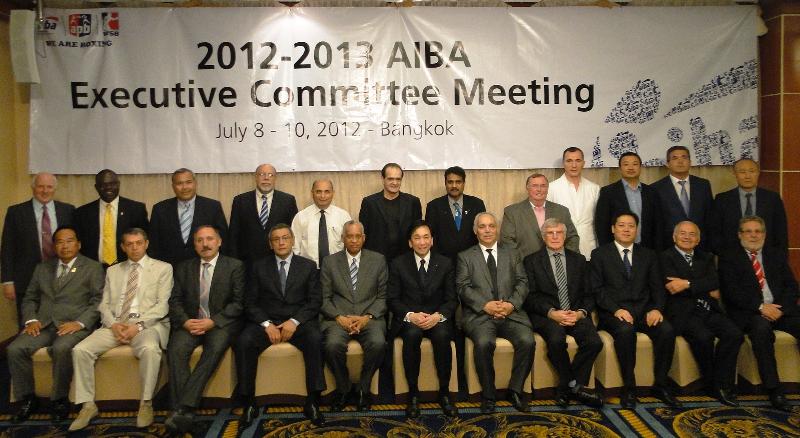 Bangkok, Thailand, 11 July 2012 – AIBA President, Dr. Ching-Kuo Wu closed on Tuesday 10 July the 2012-2013 AIBA Executive Committee Meeting that was held over three days in Bangkok, Thailand.  The most significant topic on the agenda was the approval of the first ever AIBA Professional Boxing (APB) Technical & Competition Rules. Some amendments were also made to the AIBA and World Series of Boxing (WSB) Technical & Competition Rules.

“This 2012-2013 AIBA Executive Committee meeting was a crucial moment in the history of our sport and our organization. It will remain forever the occasion when the first ever APB Technical & Competition Rules were ratified. All decisions have been approved unanimously which shows the strong unity and the support that our Members are demonstrating for AIBA initiatives.

“Three days of meeting were necessary to cover our packed agenda. All Members were really interested in hearing about the latest development of AIBA including reports on the upcoming London 2012 Olympic Games, the Continental Confederations, the AIBA Commissions as well as on the AIBA Boxing Academy that will open in September 2013 near Almaty, in Kazakhstan. We were also delighted to welcome a new member in our Family with the Kosovo Boxing Federation provisional membership being accepted. Now AIBA comprises 195 National Member Federations.

“We are now just over two weeks away from the beginning of the London 2012 Olympic Games, where we will witness the historical debut of women boxing. Then the WSB will enter its third season before APB pre-season kicks off in January 2013. Together we will bring boxing into a complete new era”.

7. Report on the WSB second season

8. Progress report on APB program and impact on AIBA