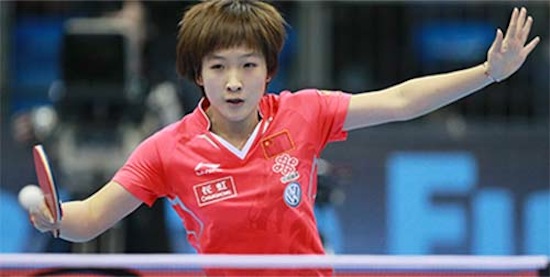 Lausanne, Nov 20: Million Dollar Finals, A total prize fund of over one million dollars on offer, the list of players, competing in the forthcoming GAC GROUP 2012 ITTF World Tour Grand Finals, was announced by the International Table Tennis Federation on Monday 19th November 2012.

Staged at the Zhejiang Huanglong Sports Centre, Hangzhou from Thursday 6th to Sunday 9th December, there is a change to the format from previous years.

The Men’s and Women’s Singles events each witness 20 players in action; 16 having qualified via the GAC GROUP 2012 ITTF World Tour as in previous years, the innovation being a further four through the inaugural year of the ITTF Euro-Africa Circuit.

Otherwise is it as per status quo. Eight pairs will contest each of the Men’s and Women’s Doubles events; similarly, eight players in will be in action in the Under 21 Men’s Singles competition and also in the counterpart Women’s Singles event.

China’s LIU Shiwen, the winner of the Women’s Singles title at the ITTF Pro Tour Grand Finals in London’s ExCeL Exhibition Centre in November 2011, defends her title as does Japan’s Kasumi ISHIKAWA, in the Under 21 Women’s Singles event.

Two players trying to retain their hard won titles; there are four players and one pair, trying to regain their precious crowns. The host nation’s MA Lin and WANG Hao are both names on the list of confirmations. Both have won the Men’s Singles title on two occasions at the Grand Finals; MA Lin won in Hainan in 2001 and in 2007 in Beijing; whilst WANG Hao succeeded in Guangzhou in 2003 and in 2006 in Hong Kong.

No player on duty in Hangzhou in the Women’s Singles event has ever won more than once. In addition to LIU Shiwen, there is just one previous winner on duty, FENG Tianwei; she won in Seoul in December 2010.

Meanwhile, in the doubles events, the only previous pair to win the title, who will be in action in Hangzhou, is the Korean combination of KIM Kyungah and PARK Miyoung; they won in Seoul in 2010.

No other partnership in action in the GAC GROUP 2012 ITTF World Tour Grand Finals has achieved the distinction; the nearest is the Singapore’s GAO Ning and YANG Zi, they won the Men’s Doubles title in Macao in 2008 and they are present in Hangzhou but not together.