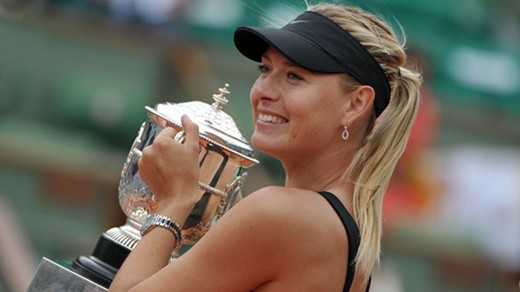 ITF News – June 11, 2012: DAY 14: Maria Sharapova wrote herself into the tennis annals on Saturday as she defeated Sara Errani 63 62 to win the Roland Garros title for the first time and seal her career Grand Slam.

Eight years after lifting the Wimbledon trophy as a 17-year-old, Sharapova completed the set in Paris and became just the tenth woman in the history of the game to win all four majors.

The world No. 2, who will jump back to top spot when the new rankings are released on Monday, was red-hot favourite against the lower ranked Errani and it was easy to see why when the match got under way.

Continuing where she left off against Petra Kvitova in the semifinals, Sharapova dominated from the outset and the Italian had no answer to her opponent’s heavy serves and groundstrokes in the early exchanges.

The Russian raced into a 4-0 lead in the first set and it looked like Errani might be steam rolled without ever getting a foothold in the match, but the gutsy Italian dug in and began to trade blows with Sharapova.

Errani clawed it back to 5-3 although there was always an inevitability about the final result. Sharapova served out the first set and then continued to dominate in the second, eventually clinching victory in 1 hour 29 minutes.

“It’s surreal,” said Sharapova. “It’s the most unique moment I’ve experienced in my career. I never thought I would have that. I thought that when I won Wimbledon at 17, I thought that would be the most treasured moment of my career. But when I fell down on my knees today I realised that this was extremely special, and even more so.”

After winning the doubles title with compatriot Roberta Vinci on Friday, beating Maria Kirilenko and Nadia Petrova 46 64 62 in the final, Errani was bidding to become the first player since Mary Pierce in 2000 to do the double at Roland Garros.

Despite missing out, the 25-year-old will be pleased with her overall performance as she had only ever won one match at Roland Garros in five years before this campaign. Her best previous result at a major was her quarterfinal finish at this year’s Australian Open, but before that she had never been past a third round.

“I start very bad, so with this player, if you give her like some games like this in the beginning, of course they are more relaxed,” said Errani.

Doubles delight for Mirnyi and Nestor

Max Mirnyi and Daniel Nestor retained the men’s doubles title on Saturday afternoon after a 64 64 victory over American twins Bob and Mike Bryan in 1 hour 35 minutes.

One break in each set was enough for Mirnyi and Nestor, the No. 1 seeds, who impressively didn’t drop a single set throughout the whole event.

The Belarusian-Canadian duo were crowned champions together at Roland Garros in 2011, which was their first Grand Slam triumph as a pair. Playing with a variety of partners, Mirnyi has now won six major titles and Nestor has won eight.