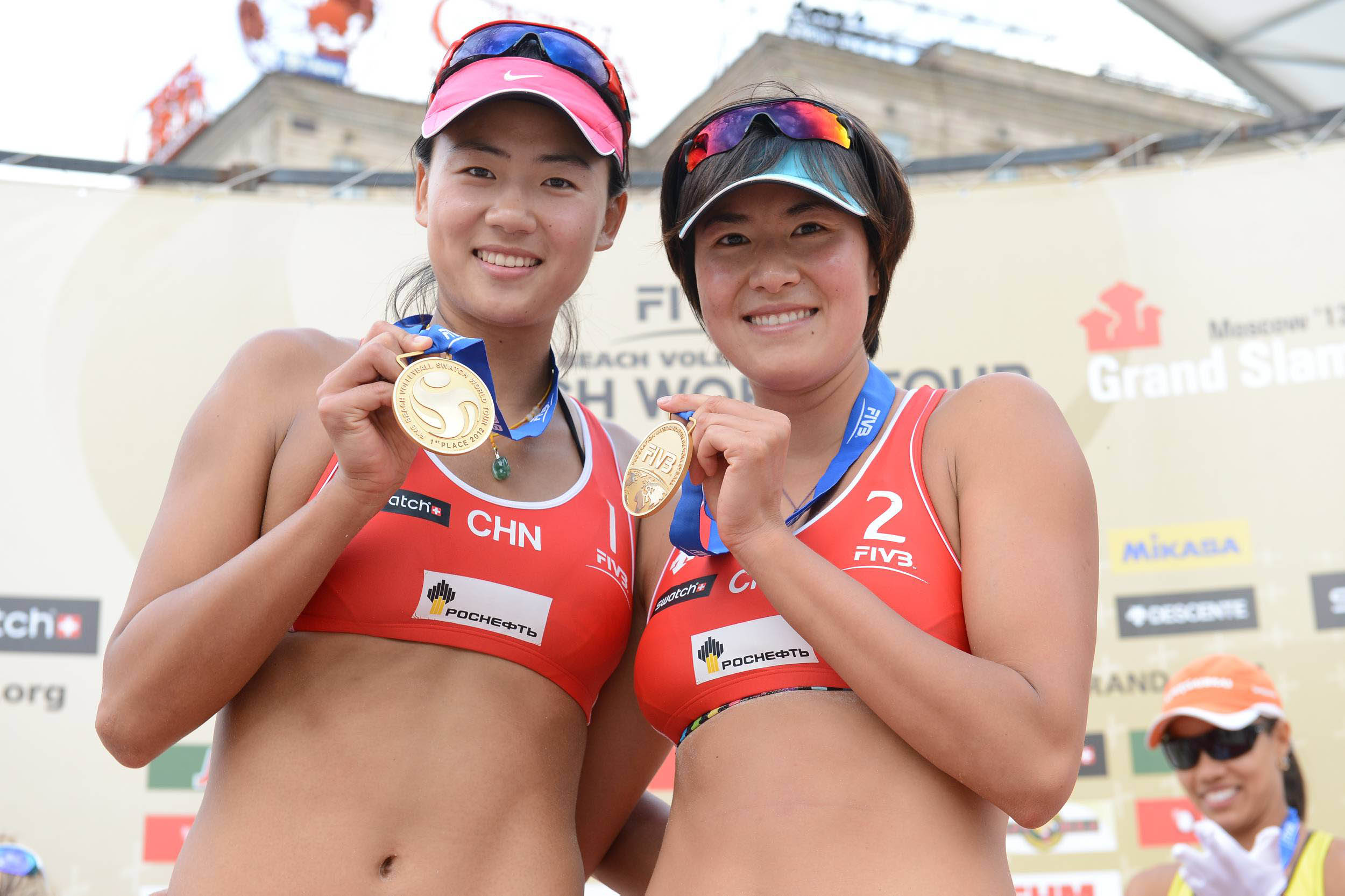 Last year’s Moscow champions May-Treanor and Walsh really did not stand a chance against the almost flawless Xue and Zhang. Both teams cruised to pool play and the knockout rounds in the Moscow Victory Park without losing a set. But In the final it was the Chinese team that took the lead right away and pushed through to their first set point at 20-13. They needed another though to secure the set.

In the second set China continued to play aggressively while May-Treanor and Walsh were just not crisp and focussed enough. The USA team tried to close the gap at 10-4, but came no further than 13-10. In a final sprint the Chinese scored seven points in a row, to get their first match point at 20-13, which was saved by the Americans. But with a high dink over Walsh’s block Xue finished the match in the next rally, winning 21-14 21-14 in just 34 minutes.

Walsh was sad they lost their Moscow title. ‘’But they earned it. We did not attack them enough. I know we can play a lot better and that on the other hand makes me happy.’’

The Chinese seem to be in top form this season, also winning gold in Brasilia and Shanghai and bronze in Sanya. Zhang: ‘’We matured a lot this winter. Last year we got carried away whenever it came down to it, we did not have peace inside. This is better now. And we trained a lot on being more aggressive in attacking.’’

They call Moscow their lucky place winning three gold (2008, 2010, 2012) and one bronze medal (2011). The Chinese team, currently ranked second on the olympic qualification list, seem big contenders for a medal in London, after finishing third in Beijing in 2008. ‘’We try not to think about that yet, we take it step-by-step’’, Xue said.

The Chinese hardly made any mistakes either in the semifinal against Talita and Antunes. Brazil managed to come back from 17-11 to 20-18 in the first set, but Xue and Zhang secured the set at their second set point. In the second set China got their first match point at 20-14, with Antonelli hitting a lot of balls out, but Brazil saved five match points in a row. A short angle shot by Zhang put the Chinese in the final at last: 21-18 21-19.

In the other semifinal Larissa and Juliana were set on winning after they lost to May-Treanor in last year’s Moscow final. But the Brazilian world champions showed no top form at all, making a lot of mistakes and were downed 21-12 in the first set. The second set was more of a game with Brazil levelling at four occasions, but at 21-20 the double olympic champions from the USA used their second match point to enter their first final of the season.

In the bronze medal match Larissa and Juliana seemed to be heading the same way again, losing the first set 21-19. But the 2012 Beijing champions recovered in the second set, beating their compatriots for the 14th time in 20 encounters (19-21 21-18 15-8).

Larissa: ‘’Of course I am disappointed with losing the semifinal. But I am happy we won the bronze match. I know we can do better and it is important we improve towards the Olympic Games. Juliana: ‘’I was sad because I played so bad this morning, so I was determined to get the bronze medal for my teammate.’’ Both girls really did set aside their disappointment, showing off their dancing moves after the awarding ceremony.

The women travel to Italy next for the Rome Grand Slam (June 12-17), the last event counting for the olympic qualification ranking. But some European teams will return to the Russian capital in the end of June (22-24) for the CEV Continental Cup final, with an olympic ticket at stake.

Moscow will also host the FIVB World Cup Olympic Qualification from June 28 to July 1, where the numbers 2 and 3 from all the Continental Cup finals will compete for two more olympic tickets.