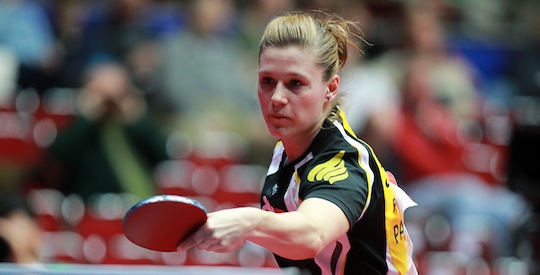 In Group A, China did not lose any match. They quietly finished their first round and waited patiently for more information on their opponent in the Quarterfinals. Will it be Poland or Austria? Hong Kong and Sweden captured the second and third positions of Group A.

Group B was dominated by Germany, the 2010 WTTC runner-up, who won all five matches 3-0. Following behind is Portugal, playing without its best player Thiago Apolonia (injured), and Singapore.

Korea Republic, bronze medallist in Moscow in 2010, assumed their status as top seed: five wins to clinch first place in Group C. Austria, despite Werner Schlager not being in best shape to represent the team, had qualified in second place. Chinese Taipei, led by Chen Chien-an, qualified in third place.

Finally, Japan, though beaten by Poland, retained their pole position. The other two qualifying teams from Group D came as a surprise: Belarus finished second. And Poland played much better than their last European Championship in Gdansk-Sopot, where they failed to reach the final draw.

After days of intense competition, the Quarter-finalists are now confirmed. China, Singapore, Japan and Hong Kong will have to wait until tomorrow afternoon to find out who their opponents will be. The eight teams ranked second and third in their respective groups will battle to progress to the Quarterfinals.

Unsurprisingly, the Chinese team, favourite for the world title, has accumulated five straight wins. With 7 points, Belarus, Hungary and Ukraine was tied for third place in Group A, but it was the Hungarians who took the third place behind China and Romania.

Defending Champions Singapore finished the first round undefeated in Group B. The Netherlands, who lost only to Singapore, has clinched the second place in Group B after their win over Korea DPR. Korea DPR was in third place.

Dominated by Japan and Germany, the host country, the third place in Group C went to Poland, who was only defeated by the former two teams.

Unquestionably, the top position of Group D was the least clear as the teams from Korea Republic and Hong Kong both have one defeat to their names. Finally, the Hong Kong team was at first place, Korea Republic at second place, and unexpectedly Austria at third place.