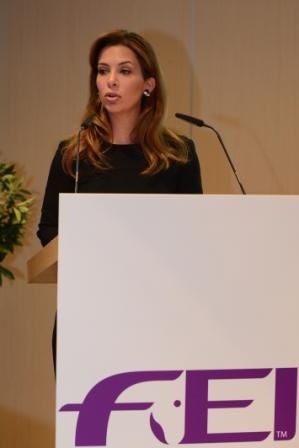 Lausanne (SUI), April 30, 2012: FEI President, HRH Princess Haya, announced today that the Saudi Equestrian Fund will finance the revitalisation of the FEI Nations Cup™ series. Announcing the agreement at the opening of the FEI Sports Forum in Lausanne (SUI) today, Princess Haya informed delegates that the Saudi Equestrian Fund will provide full financial support for the 2012 series and has also agreed to a five-year title sponsorship commencing in 2013, once the remodelling process has been finalised. The announcement was greeted with spontaneous applause from the 250 delegates attending the Sports Forum.

The Saudi Equestrian Fund was created by King Abdullah bin Abdulaziz by royal decree in November 2009 to give the Kingdom of Saudi Arabia a lasting legacy in equestrianism through sport and cultural events.

“We believe this is a fantastic opportunity to preserve one of the flagship events and heritage of the FEI. We want to be part of the process that will enhance the Nations Cup concept, and help it become a truly global, contemporary product. The objective is to make the Nations Cup universal, fresh and exciting”, said HH Prince Faisal Bin Abdullah Al Saud, Chairman of the Saudi Equestrian Board of Trustees.

Referring to the historic agreement in her opening speech at the Sports Forum, FEI President HRH Princess Haya said: “We want to express our very special gratitude and thanks to the Saudi Equestrian Fund, and particularly to HH Prince Faisal Bin Abdullah, for this wonderful support of the Nations Cup series and its future, and for what they are doing for our sport. They are truly visionary.”

Organisers of the eight FEI Nations Cup™ Top League events were informed at a meeting with the FEI in Geneva last December that a funding solution had been found for the series, but no details of the agreement were released at that time. The FEI has been in ongoing discussions with the Saudi Equestrian Fund to formalise the agreement since then, resulting in today’s announcement.

The Saudi Equestrian Fund will be part of discussions with the FEI on prize money, branding and revitalisation of the series, with the twin goals of improving the overall prize money for each event and the overall level of competition. As part of the restructuring of the series, the concept will be debated at this week’s Sports Forum, and the FEI will also create a dedicated E-platform to facilitate a transparent and open process, allowing stakeholders further opportunities to voice their opinions, and provide feedback and follow-up.

The Saudi Equestrian Fund is keen to facilitate the change and has expressed the wish that the outcome of the renovation process is a concept that is supported by all parties. The Fund will provide financial support in order to ensure the continuity of the 2012 series during the transition to the new concept which will be launched in 2013.

The Board of Trustees of the Saudi Equestrian Fund is also supporting a major exhibition in the British Museum in London (GBR) entitled The Horse: from Arabia to Royal Ascot. The exhibition, which runs from 24 May to 30 September, charts the history of the horse, from ancient civilisation to modern day sporting events and includes important loans from the British Library, Fitzwilliam Museum and the Royal Armouries, as well as rare material from Saudi Arabia.