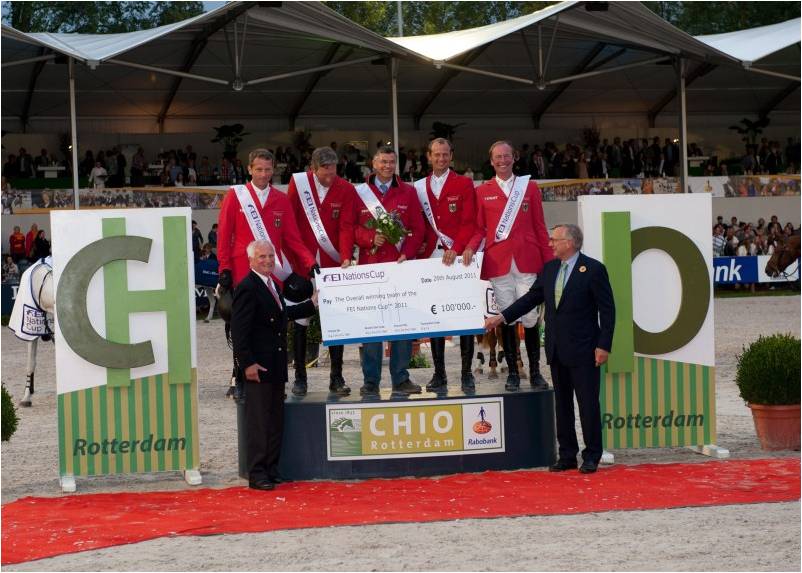 By Louise Parkes-Lausanne (SUI), 8 May 2012: Pivotal Opening, As the FEI Nations Cup™ celebrates its 10th anniversary in 2012, the world-class series will have an extra edge in the lead-up to this summer’s London Olympic Games. Chefs d’Equipe and trainers will use this most testing team Jumping tournament to view the form and medal-winning potential of the talent available to them, and there is huge anticipation of a great season ahead.

French riders in particular will be under no illusions as the action gets underway this Friday afternoon (11 May) on their home ground at La Baule. Pascal Dubois, National Technical Director of the Fédération Française d’Equitation (FFE) said recently, “Because it is the only CSIO 5* in France, we have to honour our nation with a most experienced team in La Baule. The programme for the top 10 rider-horse couples in France amongst which the Olympic team will be chosen is set. According to the results obtained in La Baule, we will compose a team which will participate to the Rome CSIO 5*, to St Gallen and to Rotterdam. The FEI Nations Cup circuit is the format which comes the closest to the Olympic Games, requiring both performance but also a good team cohesion. Evidently, we are going to be very attentive to each rider’s performance.”

That puts the forthcoming series in context. No pressure on the home side then!

The French, of course, have a superb record in the FEI Nations Cup™ Top League, sharing the record for most wins – four in total – with Germany. When the Super League concept was born in 2003, under the Samsung banner, the French swept to stylish victories over the first two seasons before their grip was broken by the USA in 2005. Since then it has become a game of “cat-and-mouse” between themselves and the Germans, although the tough relegation process ensured that France spent 2008 on the sidelines while Germany recorded the third leg of an historic hat-trick.

Having fought their way back for the 2009 season however the French reigned supreme once again, showing the grit and determination that is key to this most enduring of all FEI disciplines. It is now 103 years since the first official Nations Cup event took place, yet for competitors, horse-owners, National Federations and the general public around the globe, the pride and passion it stirs has never faded. The FEI Nations Cup™ Top League is due for a “face-lift” at the end of this season, but the core values of sportsmanship, camaraderie and mutual respect will remain at the heart of it.

Having increased the number of participating countries to 10 in 2010, the eight-nation format was restored last season when Germany came out on top ahead of The Netherlands in second, Great Britain in third and Ireland in fourth place. France lined up fifth after the last of the eight events, while Belgium finished sixth. But for the USA it was the end of the line as they were relegated, along with Denmark.

These two teams are replaced in 2012 by Switzerland, winners of the FEI Promotional League series, and Sweden, who came out on top at the FEI Promotional League 2011 Final in Barcelona, Spain last September. Each of these two nations were competitive during the early years of the Top League but were relegated in 2010. They made it their business to regain their place amongst the elite however and will, no doubt, come out with all guns blazing this week to begin the eight-leg battle against the defending champions from Germany and their Dutch, British, Irish, French and Belgian counterparts.

BEST OF THE BEST

Like the competing teams, the FEI Nations Cup™ Top League venues are also the best of the best. Having visited the gracious surroundings of the seaside resort at La Baule, the 2012 series moves on, in quick succession, to St Gallen (SUI) and to Rome, which this year celebrates 80 years of fantastic sport at the charming Piazza di Siena in the heart of the Italian capital city.

Rotterdam in The Netherlands is the next port of call in June, and then it is on to Aachen in July. With just three weeks to go to the opening of the Olympic Games at that stage, success at the prestigious German event will augur well for the winning nation, but there will still be time to add some finishing touches to final preparations at Falsterbo (SWE) and Hickstead (GBR), later in the month, while we will know the fate of the 2012 Olympic team title by the time the last leg of the FEI Nations Cup™ Top League visits Dublin (IRL) in August.

This year’s La Baule fixture will be tinged with sadness in the absence of René Pasquier, who served as President of the Organising Committee for the popular CSIO for the last 25 years, but who sadly passed away in February of this year.

His vision and drive placed La Baule amongst the most popular events on the international calendar. In a tribute, FEI President HRH Princess Haya recently described him as “a truly wonderful man who dedicated himself tirelessly to making La Baule the iconic event it is today. He will be sorely missed by FEI staff members who have worked closely with him over the years. The FEI will also be forever indebted to René, whose passion has showed no bounds for this fabulous world-class setting where the great Jumping champions make their mark.”

The squad representing France at next week’s opening leg of the FEI Nations Cup™ Top League will, no doubt, be determined to honour his memory with their best possible effort.

The sport of Nations Cup Jumping has continuously evolved, and looks forward to some major changes in 2013. At last week’s Sports Forum, the FEI was delighted to announce that the Saudi Equestrian Fund will provide full financial support for the 2012 series and has also agreed to a five-year title sponsorship commencing next year, once a remodelling process has been finalised.

Organisers of the eight FEI Nations Cup™ Top League events were informed at a meeting with the FEI in Geneva last December that a funding solution had been found for the series, but no details of the agreement were released at that time. The FEI has been in ongoing discussions with the Saudi Equestrian Fund to formalise the agreement since then, resulting in this week’s announcement.

Before the changes are made however, eight top nations will line out at eight top-class venues in the 2012 FEI Nations Cup™ series which will decide the leading nation in the world when it comes to consistent performances over a four-month season of fantastic sport.

For further information on the first leg of the 2012 FEI Nations Cup™ series at La Baule, consult www.labaule-cheval.com.

103 years of team competition – the FEI Nations Cup™ series continues to thrive as it marches on in its second century.

2 rounds of jumping – and possibly a third-round jump-off against the clock if teams are tied at the end of the second round.

2 new nations for 2012 – Sweden and Switzerland – who emerged from the 2011 Promotional League.

2 countries hold the record for most wins in the series – France and Germany have each won the title four times.

The FEI Nations Cup™ is the oldest of the FEI series. The team competition has existed for over a century, but it was in 1964 that the Nations Cup became a series when a ranking was established. Since then it has gone through a number of transformations, run as the President’s Cup, the Prince Philip Trophy, and more recently as the Super League. In recent years there has been an awareness that the concept was in need of a major review and the proposed restructuring process is seen as key to ensuring the future of the series.

The FEI Nations Cup™ Top League is currently run at eight selected European venues, but the concept was debated at the Sports Forum in Lausanne and, following further consultation, proposed changes to the format will be voted on at the General Assembly in Istanbul (TUR) in November.