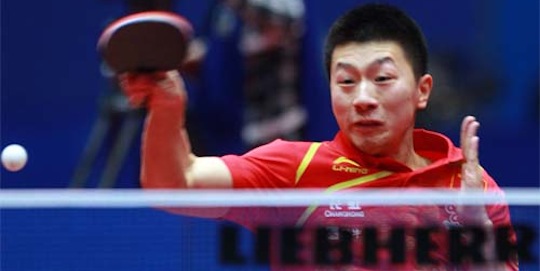 Newly Crowned World Team, Unbeaten at the recently completed LIEBHERR World Team Championships in Dortmund, China’s 23 year old MA Long and 21 year old DING Ning, retain their places at the top of the respective Men’s and Women’s World Ranking lists. They appear in the no.1 positions on the listings issued by the International Table Tennis Federation on Thursday 5th April 2012. Next in line on the Men’s list is ZHANG Jike, the reigning World champion. He is followed by WANG Hao, XU Xin and MA Lin; the players who lined up alongside MA Long in the Chinese team in Dortmund and won the Men’s Team title.

The one member of the trio to make progress is MA Lin, he climbs from no.7 to no.5; the other members of the quintet retain their March Rankings. Meanwhile, Germany’s Timo BOLL remains at no.6 with Japan’s Jun MIZUTANI climbing one place to no.7; the player to make way is Korea’s JOO Se Hyuk, formerly at no.5, he now appears at no.8. Three times Men’s Singles World champion, WANG Liqin, retains his no.9 spot as does the trio that completes the top 12 names. WANG Liqin’s Chinese compatriot, CHEN Qi, is at no.12, behind Germany’s Dimitrij OVTCHAROV at no.10 and Chinese Taipei’s CHUANG Chih-Yuan at no.11.

Similarly, the five players who formed China women’s squad at the LIEBHERR World Team Championships in Dortmund occupy the first five places on the Women’s World Rankings. One place behind DING Ning in second spot is GUO Yan. She changes places with LIU Shiwen; LI Xiaoxia retains her no.4 place with GUO Yue climbing from no.7 to no.6. Japan’s Kasumi ISHIKAWA appears at no.6 for the second consecutive month, with Singapore’s WANG Yuegu advancing one place to no.7 and Hong Kong’s TIE Yana two places to no.8.

FENG Tianwei, also from Singapore, falls from no.5 to no.9; with China’s WU Yang, not present in Dortmund, also on the decline. Formerly at no.9, she is now at no.11. Japan’s Ai FUKUHARA and Sayaka HIRANO both climb one place and complete the top 12 on the Women’s list; Ai FUKUHARA is at no.10, Sayaka HIRANO at no.12.