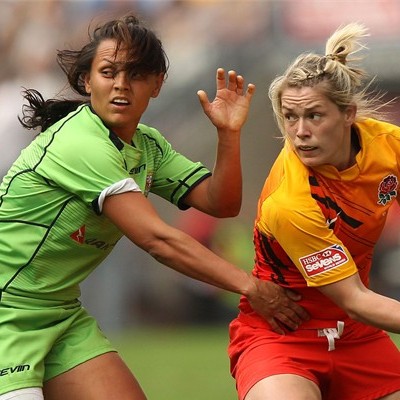 Dublin-Ireland, May 11, 2012: London Sevens, Women’s Rugby took another significant step towards the Rio 2016 Olympic Games with the hosting of a key IRB workshop in London this week focusing on High Performance.

With the Women’s Game having experienced a stellar year on and off the field and more than one million women and girls participating worldwide, the second IRB Accelerated High Performance Women’s Rugby Workshop assisted participating Unions to implement best-practice techniques for furthering the Game’s elite athletes.

Representatives from 25 Unions were joined by leading experts from across the sports sector and England’s Maggie Alphonsi, to identify and develop a pathway that will optimize competitiveness and performance for the Game’s stars in the lead up to Rio 2016 and ensure that the foundations are in place for Women’s Rugby to continue its phenomenal growth and competitiveness.

The workshop comes on the eve of the final stand-alone IRB Women’s Sevens Challenge Cup event which will take place in front of a packed Twickenham stadium at the final leg of the HSBC Sevens World Series this weekend, and the IRB is committed to a dedicated Women’s Series next season. Qualifying for both the Women’s Rugby World Cup Sevens in Moscow next year and Women’s Rugby World Cup 2014 in France is well underway as elite competitions in the Women’s Game continue to expand and the standards of play are raised ever higher.

IRB Women’s Development Manager Susan Carty said: “Women’s Rugby is going from strength to strength. We now have more women and girls playing Rugby than ever before and our Unions are beginning to maximize the positive effects of Olympic inclusion.”

“A key strategic goal of the ground-breaking IRB Women’s Rugby Plan is to deliver a world-class Rugby Sevens women’s event at the Olympic Games in four years’ time and thanks to IOC support and commitment from our Unions the hosting of these workshops mark a significant step in reaching that objective,”

England star Maggie Alphonsi who attended day one of the workshop said: “It was a great opportunity to meet and talk to people involved in the Game from around the world. I really enjoyed sharing ideas and opinions and becoming more aware of the amount of work taking place in the Women’s Game. As a player you don’t see the work done by so many people, you just get on with the job. As an athlete, it is very exciting to see the steps the IRB is taking to progress High Performance for Women’s Rugby. Meeting the High Performance Managers from so many countries around the world was fantastic, their passion and commitment made my day, it really blew me away.”

The workshop also focused on talent identification and recruitment and talent development to ensure the very best athletes reach their full potential at the Olympic Games in 2016. The programme is based on the World Academy of Sport athlete performance pathway model who works in partnership with the IRB Administrators Academy to deliver the workshop.

The IRB will continue to provide ongoing support to Unions in the implementation of their four-year plans (2012-2016) through existing regional-based development officers and the IRB Women’s Rugby Development Manager.

As part of the IRB’s commitment to growing the game around the globe, the next Accelerated High Performance Women’s Rugby Workshop, scheduled for later this year, will feature Unions from Asia and Oceania.

The third IRB Women’s Sevens Challenge Cup will take place this weekend as part of the Marriott London Sevens, which is the finale of the HSBC Sevens World Series. Twelve invited teams from six continents will compete for the prized cup. England, crowned champions in Hong Kong in March, will look to retain the title in front of an anticipated record crowd. They will be joined by Canada, who took the inaugural title in Dubai in December, USA, Australia, South Africa, China, Kazakhstan, Brazil, Russia, Netherlands, Portugal and France.