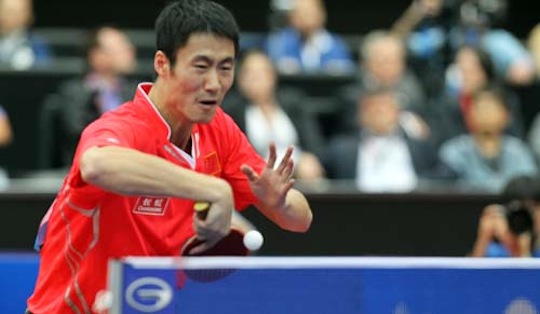 Lausanne-Switzerland, May 23, 2012: Local Heroes, The host nation’s MA Long and DING Ning, the two players whose names stand at the very top of current World rankings, are the top seeds respectively in the Men’s and Women’s Singles events at the GAC GROUP 2012 ITTF World Tour China Open, which starts in Shanghai on Wednesday 23rd May.// Both have points to prove, both suffered defeats at the recent GAC GROUP 2012 ITTF World Tour KRA Korean Open in Incheon.

MA Long was surprisingly beaten by the home country’s LEE Sang Su in the second round, currently listed at no.60 on the Men’s World Rankings; whilst DING Ning experienced defeat in the final against colleague LIU Shiwen. The defeat of DING Ning not was not as sensational as that of MA Long, LIU Shiwen is listed at no.2 on the current Women’s World Rankings and is the no.2 seed in Shanghai.

ZHANG Jike, the reigning World champion is the second seed in the Men’s Singles event ahead of compatriot and immediate predecessor in the role of World champion, WANG Hao.

However, it is on the Chinese stars, XU Xin and WANG Liqin, that much attention is focused; the fourth and seventh seeds respectively, they both hail from Shanghai and will certainly have local support. XU Xin currently leads the GAC GROUP 2012 World Tour Men’s Singles Standings; whilst in total, WANG Liqin has won more Tour titles than any other male player.

Meanwhile in the doubles events, it is a change of partners for China; undoubtedly with the OIympic Games in mind. In Korea, WANG Hao partnered ZHANG Jike, in Shanghai he partners MA Long, with MA Lin joining forces with ZHANG Jike.

Similarly, in the Women’s Doubles, in the absence of GUO Yue, who is recovering from illness, DING Ning partners LI Xiaoxia. They are the no.2 seeds, the no.1 seeds being Japan’s Hiroko FUJII and Misako WAKAMIYA.

A total prize fund of US$ 120,400 is on offer, the winners of the respective Men’s and Women’s Singles event each leave with US$ 49,000 credited to their bank accounts.