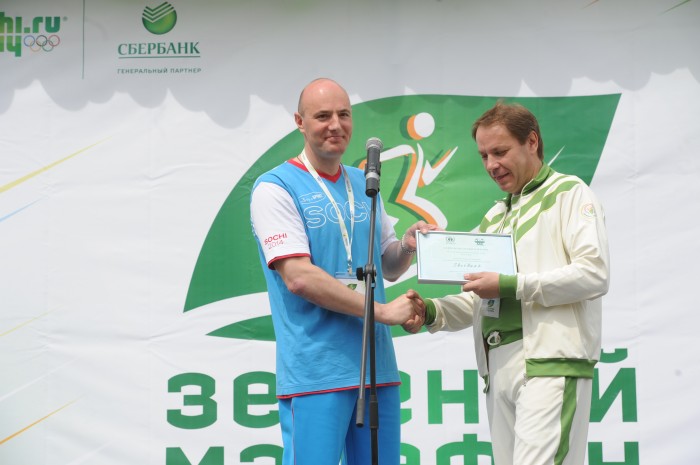 Sochi-Russia, May 23, 2012: Thousands of Russian people, including Sochi 2014 volunteers, have taken part in the “Green Marathon” campaign to complete an Olympic run and plant trees across the country. From east to west participants have planted nearly two thousand trees that will absorb more than 1,200 tons of carbon dioxide a year, supporting the Sochi 2014 environmental strategy for the Games. The project is part of a global campaign entitled “Billion Trees”, implemented by the United Nations Environment Program. Events have been held in 42 major cities across Russia including Moscow, Sochi and St. Petersburg.

Health enthusiasts were all invited to take part in the 4.2-mile distance run – that totaled to 200 km. of Olympic run. After the marathon competitors who included Sberbank of Russia’s staff and Sochi 2014 volunteers contributed to the arrangement of green spaces, having planted nearly two thousand trees.

The “Green Marathon” was organized by Sochi 2014’s General Partner, Sberbank of Russia.

“The “Green Marathon” campaign is a great opportunity for everyone to take part in the marathon and get involved in the global environmental ‘Billion Trees’ Campaign. We hope to see more “green” campaigns, and as a result, thousands more trees planted before Sochi 2014. In February, a marathon was held in Kenya to celebrate the 40th anniversary of UNEP. The baton was then passed on to Sberbank that staged the “Green Marathon”. These events once again highlight the strong link between sport and environment.”

“The “Green Marathon” is a great sports festival for the entire nation. We are grateful to our long-time Partner, Sberbank of Russia that provided an opportunity for everyone to take part, promoting a healthy lifestyle and encouraging all of us to look after the environment. Planting trees helps to create the “green heritage” of the Games even today, and reaffirms our commitment to stage the Games in harmony with Nature. “

UNEP (United Nations Environment Program) is a UN program promoting the coordination and implementation of measures to protect and improve the environment. It was established by a General Assembly resolution of December 15, 1972.

In 2009, the Sochi 2014 Organizing Committee and leading international organization for the protection of the environment, UNEP, signed a Memorandum of Understanding. The memorandum provides for the participation of UNEP as an independent observer in the process of implementing the Sochi 2014 environmental strategy. The parties intend to combine their efforts on environmental protection activities during the Olympic Winter Games and Paralympic Winter Games of 2014 in Sochi.

The Sochi 2014 Environmental Strategy is based on four main dimensions: “Games in Harmony with Nature,” “Climate Neutral Games,” “Zero Waste Games”, “Enlightenment Games”. The main objective of the Environmental Strategy is to preserve the unique natural surroundings of Sochi, including protected natural complexes of the Sochi National Park and the Caucasian Nature Biosphere Reserve.

The “Billion Tree Campaign” is a global campaign aimed at making the planet greener. It was established under the UN Environment Program (UNEP). 12 billion trees have already been planted worldwide since the program began in 2007.