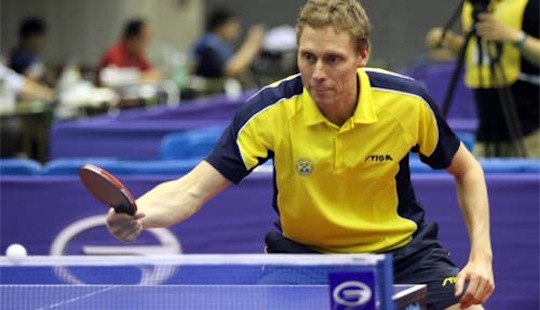 Lausanne, August 24, 2012: The leading names in the qualification stage of the Men’s Singles event at the GAC GROUP 2012 ITTF World Tour Harmony China Open in Suzhou, booked their places in the main draw, following the conclusion of the group stage matches on Thursday 23rd August.

Similarly, it was success for Chinese Taipei’s CHEN Chien-An and, for the most experienced of all, Sweden’s 46 year old Jrgen PERSSON, the 1991 World champion; he concluded his first phase matches unbeaten and thus reserved his place in the first round proper.

However, there were moments of consternation as proceedings in the initial stage came to a conclusion.

No surprises amongst the leading names in the Men’s Singles event but there were upsets amongst the female elite, with Hong Kong’s 15 year old DOO Hoi Kem leading the way.

Otherwise, the principal names in the first phase of the Women’s Singles event emerged unscathed.

Matches in the main draw of the Men’s and Women’s Singles events commence on Friday 24th August. —- ITTF/Photo: Tetsu Yamashita