LAUSANNE (SUI), April 01, 2012: The nominative registration for the 23rd Acrobatic Gymnastics World Championships in Lake Buena Vista, Florida (USA), has been completed. Those scheduled to compete April 16-18 at the ESPN Wide World of Sports Complex’s HP Field House, located at Walt Disney World Resort, for the right to call themselves the world’s best are a mix of past world champions and ambitious, successful international competitors. The field of 180 gymnasts includes athletes from 23 countries. 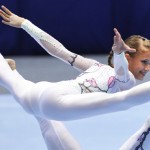 The Acrobatic Gymnastics World Championships, being held outside Europe for the first time since its inception in 1974, will welcome a number of past World Champions, including Edward Upcott (GBR), who with partner Douglas Fordyce won the Men’s Pairs title at the 2010 World Championships in Wroclaw, Poland.

Kateryna Sytnikova and Anastasiya Melnychenko of Ukraine, the 2010 World Champions in the Women’s Pairs, will also try to defend their title against a strong crop of challengers, including Sviatlana Mikhnevich and Yana Yanusik of Belarus, women’s titlists at this month’s Maia Acro World Cup in Portugal.

From Russia, reigning Women’s Group Gold medallists Aigul Shaikhutdinova, Ekaterina Stroynova and Ekaterina Loginova are also back for another round, having presented strong performances in recent competitions. Meanwhile, a strong Men’s Group from China comprised of Tang Jian, Wang Lei, Zhou Yi and Wu Yeqiuyin will attempt to claim the top place on the podium. These four Chinese men are currently the top ranked Men’s Group in the world.

Absent from the competition will be 2010 Mixed Pairs World Champions Kristin Allen and Michael Rodrigues of the United States, who have retired from competitive sport, leaving the field open for a new world champion in this discipline.

Competition in Lake Buena Vista will include all Acro disciplines: Men’s, Women’s and Mixed Pairs, as well as Men’s and Women’s Groups. World titles won’t be the only thing at stake in Florida next month. The 2012 World Championships will also serve as a qualifying event to the 9th World Games in Cali (COL). The World Championships will be followed by the 7th Acrobatic Gymnastics World Age Group Competitions on April 20 – 22 that will bring some 400 junior acrobats to Lake Buena Vista.

Check out the charts for nominative athlete registration!

for more information on the two events.

The FIG event microsite will be launched shortly at http://lakebuenavista2012.fig-gymnastics.com/.

Acrobatic gymnastics combines the beauty of dance with the strength and agility of acrobatics. Routines are choreographed to music and consist of dance, tumbling, and partner skills. At the elite level, each pair or group performs a balance, dynamic and combined routine. Pyramids and partner holds characterize the balance routine, while synchronized tumbling and intricate flight elements define the dynamic exercise. An acrobatic gymnastics pair consists of a base and a top. A women’s group is comprised of a base, middle and top partner, while a men’s group has a base, two middle partners and one top partner.