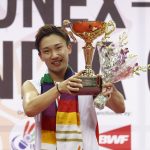 Currently vying for the Asian championship, the 23-year-old Japanese has also earned a crack at the World title, qualifying for the TOTAL BWF World Championships 2018 in Nanjing, China this summer.

Based on the BWF World ranking list of 26 April 2018, which determines the eligibility of players under Phase 1 of the qualifying system, Momota has risen to No.17 in the ‘Race to Nanjing’.

The former World No.2 player, who missed over a year of competitive badminton before resuming his career last July, has earned his place behind compatriots Kenta Nishimoto (No.13) and Kazumasa Sakai (No.16).

No country has managed to qualify four players or pairs in any category.

In Men’s Singles, defending champion Viktor Axelsen of Denmark heads the qualifiers; two of his compatriots, Anders Antonsen (No.15) and Hans-Kristian Vittinghus (No.18), have also qualified comfortably.

Reigning Olympic champion Chen Long (No.3) and five-time World champion Lin Dan (No.8), both of China, are in the top eight of the list along with compatriot Shi Yuqi (No.4).

In Women’s Singles, Japan’s Sayaka Sato has edged out compatriot Aya Ohori by just over 4,100 points. Sato (No.13) is the third Japanese behind Akane Yamaguchi (No.1) and defending champion Nozomi Okuhara (No.6).

Apart from Japan, China (Chen Yufei, He Bingjiao and Chen Xiaoxin) and Thailand (Ratchanok Intanon, Nitchaon Jindapol and Pornpawee Chochuwong) each have three players in Women’s Singles. Chochuwong clinched her spot by just 828 points over her compatriot, Busanan Ongbamrungphan (No.24).

Japan came closest to qualifying four pairs in any category, as their fourth Women’s Doubles pair Mayu Matsumoto/Wakana Nagahara are ranked No.11.

Japan’s hopes will rest on Olympic champions Misaki Matsutomo/Ayaka Takahashi (No.3); Yuki Fukushima/Sayaka Hirota (No.4) and Shiho Tanaka/Koharu Yonemoto (No.5).

Defending champions Tontowi Ahmad/Liliyana Natsir of Indonesia have qualified in third place, while last year’s runners-up Zheng Seiwei/Chen Qingchen – the pair has been split since then – have qualified in first.

BWF are also entitled to nominate a wild card in each category and will confirm by Friday 4 May if it intends to do so. If it decides to, BWF will announce the wild card names by Thursday 10 May. By that same date, member associations have to confirm the entry of their players/pairs who have qualified in Phase 1.

The MAs will be informed by Thursday 17 May of the players/pairs who are eligible to qualify under Phase 2. BWF will also publish the list of reserves to fill the draw should that be necessary.

Member associations will have to confirm the entry of players in Phase 2 by Thursday 24 May.

The TOTAL BWF World Championships will be held in Nanjing from 30 July to 5 August 2018. —- BWF