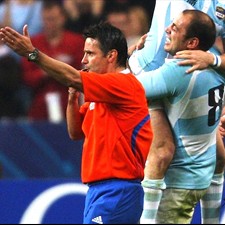 The Frenchman will start on September 3 and joins the global governing body at an exciting time for the sport, which is experiencing unprecedented growth. Jutge succeeds Paddy O’Brien, who starts a new role overseeing the development of IRB Rugby Sevens match officials ahead of the sport’s Olympic Games debut in 2016.

A vastly experienced former international referee who took charge of 35 Tests between 1996 and 2007, Jutge was selected to officiate at two Rugby World Cups in 2003 and 2007. His final international turned out to be the RWC 2007 quarter-final between Argentina and Scotland as a persistent knee injury forced him to call time on his career with the whistle.

Since retiring from refereeing in 2009, the 46-year-old has channelled his passion for the Game and refereeing into identifying and nurturing the best up-and-coming match official talent in France in his role as Referee Manager for the Fédération Française de Rugby (FFR). Under his guidance, France has delivered a number of referees for international duty.

IRB Chairman Bernard Lapasset welcomed the appointment: “This is a key appointment for the IRB in what is a hugely important area of the Game and Joël brings with him vast experience, great knowledge and expertise as well as enormous respect within the international Rugby family. This is an excellent opportunity.”

Earlier this year, the IRB announced a restructured and more streamlined selection process overseen by an expert committee, which Jutge will join. Chaired by IRB Council Member and former Scotland international John Jeffrey, the committee also comprises former elite referees Lyndon Bray, Tappe Henning (both SANZAR), Donal Courtney and Clayton Thomas (both 6 Nations) and meets four times per year to make selections for the next international window with all performances reviewed as part of the next round of international selections.

Jeffrey said: “Joël proved to be an outstanding candidate during a process that featured excellent candidates. His vision, experience, skills and excellent ability to identify and develop up and coming talent and manage high performance referees are superbly suited to the role.”

“These are exciting times for Rugby worldwide and Joël’s appointment underscores the IRB’s commitment to ensuring that the best and fittest officials are appointed to our showcase events and matches, while working with our Unions to guide the next generation who are knocking on the door.”

Jutge said: “I am delighted to be appointed to this role at such an exciting time for the Game and its growth. I am passionate about Rugby and officiating and excited about the IRB’s vision of ensuring that the structures continue to be in place to allow our top referees to shine on the world’s biggest stages, while providing the platform for our best young talent to prove themselves.”

“I am looking forward to using the experience gained through my years working with the FFR to work within a strong IRB Referee Selection Committee alongside Paddy O’Brien to strengthen relationships with stakeholders and add further momentum to our commitment to driving forward match official standards across both forms of the Game.”

The IRB is committed to ensuring that the platform is in place to promote the very best refereeing standards at the elite level of the Game. Through his role, Jutge’s priority will be the continued promotion of consistency and performance towards the strategic goal of delivering the best available panel for Rugby World Cup 2015 while at the same time applying the best-for-best principle in the selection of referees for each international window. —- IRB