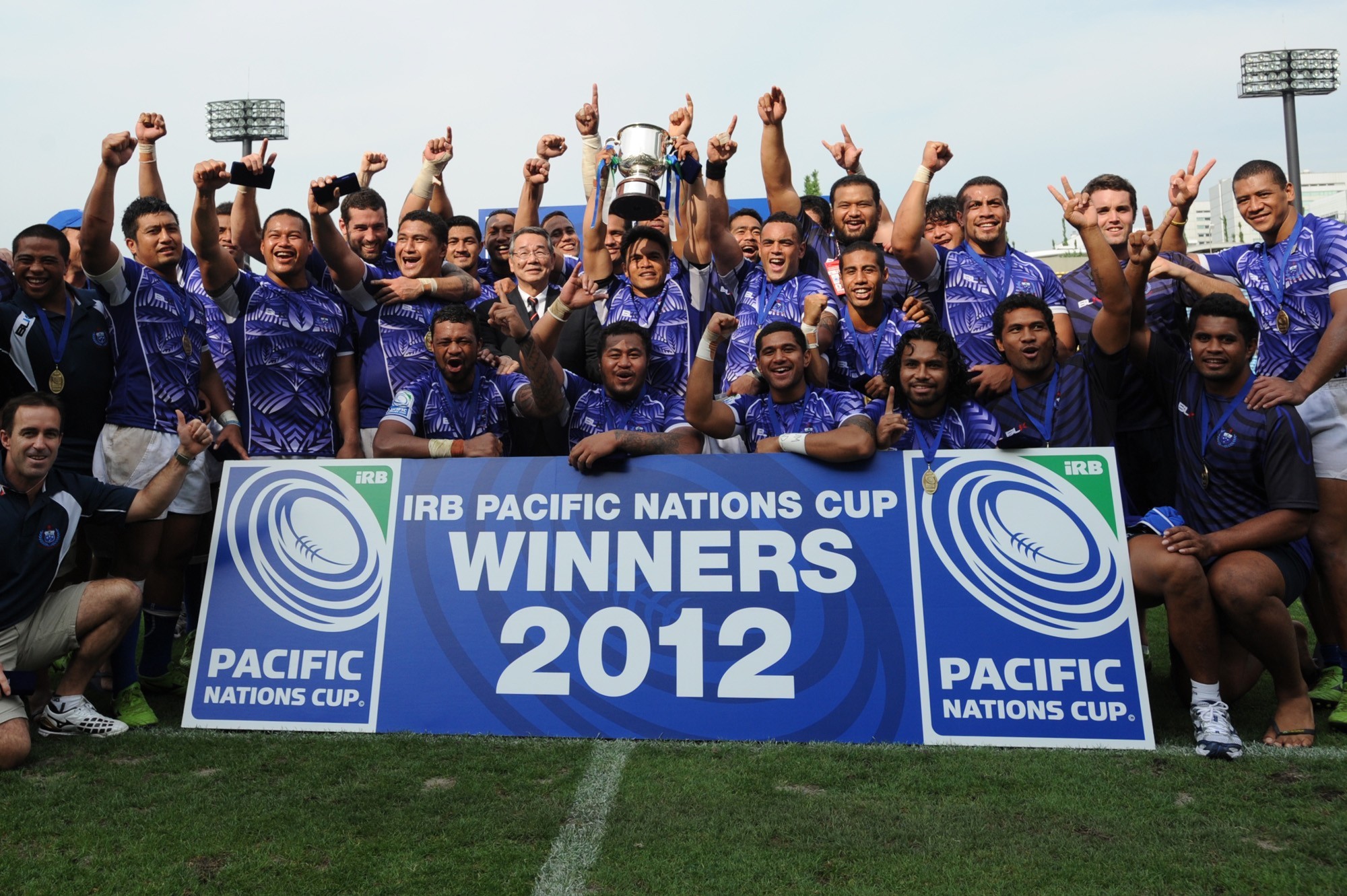 (IRB News)Tokyo-Japan, June 17, 2012: Samoa has won the IRB Pacific Nations Cup 2012 following a thrilling 27-26 win over Japan at Tokyo’s Prince Chichibu Memorial Rugby Ground on Sunday. Having trailed 16-0, the Samoans – who also won the competition in 2010 – then scored 27 unanswered points before having to withstand a tremendous fight back by the hosts.

Two late tries saw Japan close to within a point but Ryan Nicholas’ conversion of Toshiaki Hirose’s try drifted right, much to the disappointment of the large majority of the 5,386 in attendance.

“I am lost for words,” said Samoa coach Stephen Betham. “We knew Japan wouldn’t just give us the Cup. We knew we had to win it off them. They played very well and forced us into making mistakes. They sure gave us a good fight.”

Japan coach Eddie Jones was left to ponder what might have been.

“We have lost three games in the PNC by six, four and one point,” he said.

Logovili Mulipola’s shoulder charge on Harumichi Tatekawa in the 18th minute handed Japan a one man advantage and the hosts responded in style with HendrikTui and Takashi Kikutani crossing for tries.

But within minutes of Mulipola’s return, Kahn Fotualii finally got the Samoans on the board with Faatiga Lemalu adding a second as the teams went into the break with just two points separating them at 16-14.

“They [Japan] disrupted us at first when we tried to maul. So that’s why we changed our plan and sucked them in before driving, Samoa captain David Lemi said of his side’s slight change in tactics.

Japan’s inability to stop the visitors pack saw Anufe hand Samoa the lead in the 43rd minute with a penalty, before Lemalu powered over for his second try of the day.

Lolo Lui added the conversion as Samoa led 24-16, before a second penalty by Anufe saw the lead increased to 11 with 15 minutes remaining.

Japan, however, weren’t done and Kikutani powered over in the 68th minute following a good break by Toshiaki Hirose and a line-out steal close to the Samoan line.

With the crowd cheering their every move, Hirose then finished off a period of sustained pressure to go over in the corner and set up Nicholas for the conversion.

But the cheers turned to groans of despair as the kick drifted wide handing Samoa the win and the silverware.

“Full credit to Japan,” said Lemi. “Even though they didn’t win their three games they have performed well. We were lucky and had the bounce of the ball today. But they gave us a lesson. But hats off to my guys. They dug in and that’s what got us the result.”

Betham paid tribute to his players and coaching staff.

“I sort of got thrown in at the deep end three weeks before we came here,” he said of his appointment as head coach.

“It was a big shock and it’s been a big learning. But I am thankful I have a great management group and we have helped each other get through.”